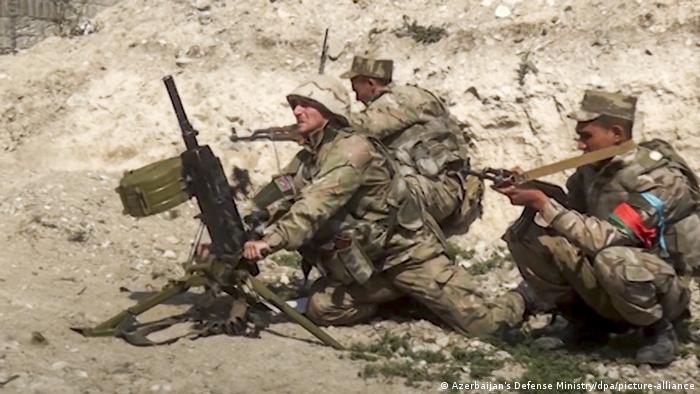 Fighting between Azerbaijani and Armenian forces in the Caucasus escalated on Monday, with fresh casualties reported in the disputed Nagorno-Karabakh region.

Some 200 troops have been wounded, Armenian Defense Ministry said, but many were only slightly injured and have returned to action.

Officials in the separatist region of Nagorno-Karabakh said that 26 more of their troops were killed on Monday evening, bringing the rebels' total military casualties to 84.

The overall death toll has now reached 95, with 11 civilians killed since violence broke out on Sunday; nine in Azerbaijan and two on the Armenian side.

The worst violence in the region since 2016 has raised the prospect of a new war in an area that has been simmering for decades.

The United Nations Security Council is expected to hold emergency talks on the Karabakh conflict on Tuesday, according to diplomats quoted by news agency AFP.

The meeting, taken up at the request of France and Germany, will be held behind closed doors.

Earlier on Monday, UN chief Antonio Guterres called for a ceasefire while in talks with the leaders of the two countries.

Guterres stressed "the need for an immediate stop to the fighting and resumption without precondition of meaningful negotiations without delay under the umbrella of the Minsk Group co-chairs," said Guterres' spokesperson, Stephane Dujarric.

Both countries have declared martial law. The president of Azerbaijan declared a partial military mobilization in the country as part of a presidential decree on Monday morning. Armenia began a general mobilization on Sunday.

The EU's foreign policy chief, Josep Borrell, announced on Twitter that he had spoken to ministers of both countries and stressed the need to return to negotiations under the auspices of the Minsk Group — intermediaries consisting of Russia, the US and France, adding that there is "no military solution to the conflict."

The Russian Foreign Ministry called on both sides to show restraint, according to the Russian news agency Interfax. Russia is an ally of Armenia.

A spokesperson for China's Foreign Ministry similarly urged restraint and said that they hoped the two countries could resolve their differences through dialogue, Reuters news agency reported.

While many in the international community urged for de-escalation, Turkish President Recep Tayyip Erdogan demanded Armenia end its "occupation" of Karabakh.

"The time has come for the crisis in the region that started with the occupation of Nagorny Karabakh to be put to an end," Erdogan said. "Now Azerbaijan must take matters into its own hands."

Armenia has accused Turkey of meddling in the conflict. On Monday, Armenia's ambassador to Russia claimed that Turkey had sent fighters from northern Syria to Azerbaijan to support their ally after Erdogan promised full support against Armenia.

The Armenian Foreign Ministry also accused Turkey of providing "direct presence on the ground," in a statement reported by Reuters.

An aide to Azerbaijani President Ilhan Aliyev roundly rejected both claims, according to Reuters.

"Rumors of militants from Syria allegedly being redeployed to Azerbaijan is another provocation by the Armenian side and complete nonsense," the aide told Reuters.

The EU's foreign policy spokesperson, Peter Stano, told news agency AFP that Brussels could not confirm Armenia's claim, but warned against international involvement, saying "no external interference in this conflict is acceptable."

Three days of fighting between Armenian and Azerbaijani forces have left at least 16 people dead. The clashes are the worst between the two South Caucasus nations in several years.