A massive power grid failure left all of Argentina and parts of Uruguay and Paraguay without electricity, affecting around 50 million people. Power was mostly restored by evening.

Wind and watts — Forecasting for the grid

Energy has been restored to nearly 90% of users after a massive blackout left nearly 50 million people in Argentina, Uruguay and Paraguay without power on Sunday.

The problem in the energy network left Argentina cut off from power at 7:06 a.m. local time (10:06 UTC) Sunday in what Argentine energy company Edesur attributed to "a massive failure in the electrical interconnection system."

By evening, authorities were able to restore power to most users across the three countries.

Argentina's Energy Ministry Gustavo Lopetegui said the cause of the outage was still being investigated.

"We don't have any more information right now on how it occurred. We're not ruling out any possibility, but a cyber attack is not among the main alternatives being considered," he told reporters.

An independent energy expert in Argentina said the power grid's collapse was related to systemic operational and design errors.

"A localized failure like the one that occurred should be isolated by the same system," said the president of Argentina's Center for the Study of Energy Regulatory Activity, Raul Bertero. "The problem is known and technology and studies (exist) to avoid it."

Uruguay's energy company UTE blamed the blackout on a "flaw in the Argentine network" that cut electricity to the country. 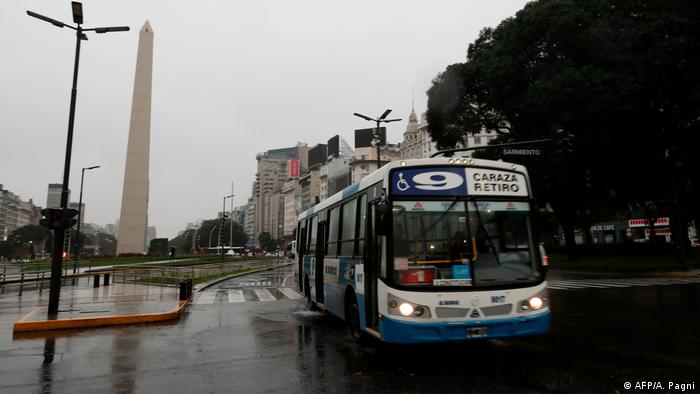 Several provinces in Argentina that had regional elections scheduled were forced to temporarily delay the votes. In the elections that were not delayed, voters went to the polls by the light of their mobile phones. The outage widely disrupted transportation, and shops were closed.

Patients reliant on medical equipment were encouraged to go to the nearest hospital with a generator.

Cities such as Santiago de Chile and Cali in Colombia have started using electric buses. Others like San Jose, Costa Rica, and Panama City are in the middle of pilot projects to make transportation cleaner. (04.12.2018)

Renewable technology is bringing light into the lives of Kalunga people, descendants of slaves living in remote communities in Brazil. Now, solar powered lamps made from recycled bottles are extending their evenings. (12.03.2019)

US President Barack Obama, Canadian PM Justin Trudeau and Mexican President Enrique Pena Nieto have said they will aim to make renewable sources of energy amount to 50 percent of North America's electricity by 2025. (29.06.2016)

Montevideo no longer to be the 'forgotten capital' of tango

Uruguay's tango aficionados gaze enviously across the waters of the Rio de Plata at the neighboring Argentinian capital Buenos Aires, where tango is king. Now tango is to return in style to its second home, Montevideo. (27.06.2018)

Can hydropower withstand a future of extreme weather? 27.08.2021