Argentina has said Britain is beefing up its military presence around the Falkand Islands, alleging that London may even have introduced nuclear weapons to the region. Britain has adamantly rejected the accusations. 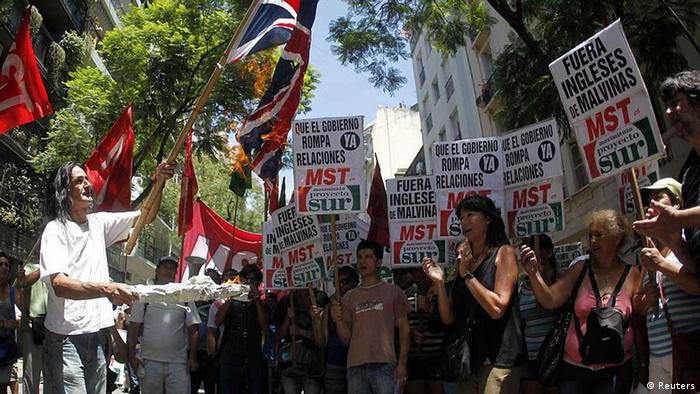 The Argentine government on Friday accused Britain of militarizing the disputed Falkland Islands in the South Atlantic, saying that London may have introduced nuclear weapons to the region in violation of an international agreement.

Argentina's foreign minister, Hector Timerman, formally lodged a complaint with the UN, condemning "Great Britain for its militarization of the South Atlantic."

"Britain now has the biggest military power in the zone," Timerman told reporters, saying that London had deployed the submarine Vanguard equipped with nuclear weapons to the region.

The Argentine foreign minister said he gave UN Secretary-General Ban Ki-moon "information about nuclear issues, nuclear arms." Under the Treaty of Tlatelolco, nuclear weapons are prohibited in Latin America and the Caribbean.

Britain's UN ambassador Mark Lyall Grant said that London does not "comment on the disposition of nuclear weapons," calling Argentina's accusation that London was militarizing the region "manifestly absurd."

Grant accused the South American nation of trying "to take advantage of the 30th anniversary of the Falklands War." Argentina claims the islands, which it calls the Malvinas, having launched an invasion in 1982 to take them by force. Britain sent a task force to retake its territory, defeating Argentina in a 74-day war that cost the lives of 649 Argentines, 255 British troops and three Falkland Islanders.

The Falkland Islands, located 460 kilometers (290 miles) from mainland South America, have a population of 3,000. The islands are an oversees territory of the United Kingdom, with London being responsible for the Falklands' foreign affairs and defense.

The UN Secretary-General has offered his good offices to help resolve the 30-year-old dispute, "if both countries request it."