Ancient cultural treasures are common casualties in military conflicts. But an international team of archeologists is working together with soldiers all over the world to protect valuable cultural artifacts. 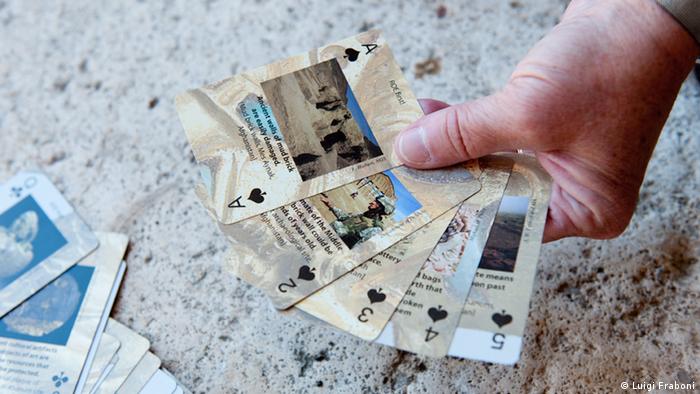 In Rome, American archeologist Laurie Rush sits on a bench in one of countless squares where the past permeates the present. The Arch of Janus looms on the left, a massive, marble entrance dating back to the fourth century. Above, the remains of Roman emperors' palaces dot Palatine Hill.

After two millennia of history - including invasions, occupations, and bombardments - much of Italy's cultural heritage still stands.

"All of us owe the Italian people an extraordinary debt of gratitude," Rush, who was a visiting scholar at the American Academy in Rome in 2010-2011, told DW. "Many of these extraordinary features throughout their country would not be here for us to appreciate if they hadn't taken these amazing measures."

In the Roman Forum, Trajan's column details in exquisite bas relief the wars between the Romans and Dacians. During the World Wars, the column itself was not a casualty, thanks to the brick structure the Italians built around the 30-meter (nearly 100-foot) column. Similarly, Leonardo da Vinci's "Last Supper" still exists today because the Italians sandbagged the wall holding the fresco before the bombs fell.

Rush, 56, has studied Italy's cultural preservation strategy at home and abroad like a general preparing for an attack - not too far afield for the archeologist, who is also a civilian employee of the US Army charged with protecting cultural heritage.

Rush is a modern-day equivalent of the Monuments Men. During World War II, armed forces and civilians from 13 nations oversaw efforts to protect many of Europe's architectural and artistic masterpieces. Today, Rush and other archeologists are on the front line of preservation in combat zones, armed with their knowledge, grit and willingness to work with the military.

Their presence is welcomed in light of damage suffered during recent conflicts. Following the US invasion of Iraq in 2003, US Marines set up a camp in the ruins of the ancient city of Babylon, with Polish troops following months later. There, the troops inadvertently crushed 2,600-year-old brick pavement and used soil containing artifacts for sandbags.

After learning of the damage, Rush volunteered her services. "It immediately occurred to me that a better educated force would not have made those kinds of mistakes," she said.

An ace for preservation 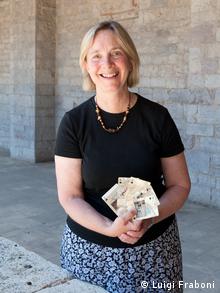 Rush educates soldiers before they are deployed

In a creative effort to inform, Rush and her colleagues designed ordinary playing cards with a special purpose: Each card contains a fact about cultural heritage in Iraq, Afghanistan and Egypt.

Deployed forces from the US and other countries can pass the idle hours playing poker and looking at photos of ancient minarets in Iraq, the Bamian Buddhas in Afghanistan and inscribed bricks and tablets. They shuffle, deal and read the messages on the cards, which indicate, for example, that they should stop digging if they find ancient artifacts and turn to local elders for archeological information.

"Without question, the five of hearts is my favorite," said Rush, while flipping through the cards. "The caption is 'protecting archeologist sites helps preserve them for future generations.' It's an image of a soldier holding hands with a tiny Iraqi child (…) and it's clear this soldier and this child have a very positive relationship."

One sergeant told Rush that through these simple cards he was able to learn about Iraq's cultural heritage, a subject that he later used to forge stronger bonds with the locals. Rush's cards spurred another soldier to sound the alert that digging was taking place at a Mesopotamian city site east of Baghdad. The site was saved.

The cards aren't the only weapon in the archeologists' educational arsenal. Rush and her colleagues start teaching armed forces and their families about archeology long before they deploy. Armed forces have often brought home souvenirs of antiquities that they've found or bought at markets, though this is illegal. Rush and her team encourage the deployed soldiers instead to purchase new items, which in turn boosts the local economy.

At the Association for Research into Crimes against Art (ARCA) conference earlier this summer in Amelia, Italy, participants said that academics and soldiers needed to march in step, as the Monument Men did during World War II. Yet the hallowed ivory tower of academia is a far hike from the military front line.

"You have to have an open mind to participate in the military culture," said Joris Kila of the University of Amsterdam, who created the European version of the playing cards. He also is a reserves officer in the Dutch Armed Forces.

Kila says soldiers are wary of "boring" professors, but he talks, they listen, because he's one of them. Many archeologists contend that the cultural property experts have to be in uniform to be successful, as were many of the Monuments Men. 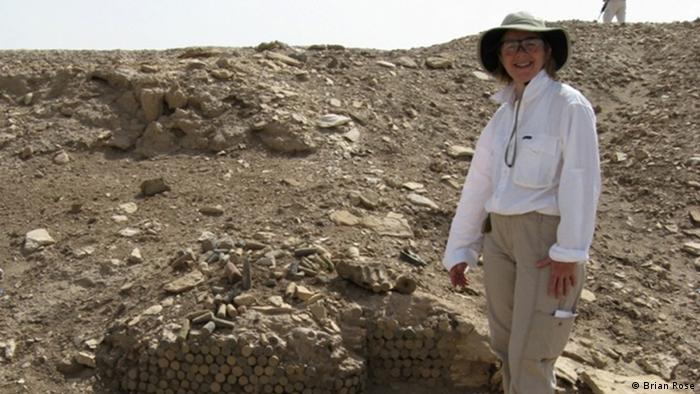 Laurie Rush with the remains of an ancient stone tower in Uruk, Iraq

The present-day model is Italy's Carabinieri. Certain members with advanced degrees and specialized training served in Iraq, mapping sites at risk for looting and arresting criminals trafficking antiquities. There was even speculation that their courageous anti-looting efforts might have prompted a 2003 bombing of their headquarters that claimed 19 lives.

At Fort Drum in New York, Rush's home base, mock Middle Eastern archeological sites have been constructed for realistic training. In Great Britain, soldiers in rehabilitation are participating in archeological digs through the Operation Nightingale program, which helps them recover from injuries while learning about cultural heritage. Meanwhile, the Austrian National Defense Academy trains military forces from around the world about cultural property protection.

The 1954 Hague Convention officially requires the protection of cultural heritage in war zones. However, soldiers without cultural training "might not recognize that a pile of stones is marking a grave and they might by accident run over it or step on it," Rush said. "That will understandably anger people in these local municipalities. And that actually can result in getting our people hurt."

Rush and Kila have joined forces to train coalition troops in Egypt. With their European and North American colleagues, they dream of creating an international center for the preservation of cultural property.

"If we're going to take care of these sites, collective action across international boundaries is really important," said Derek Fincham, ARCA's academic director and an expert in cultural heritage law.

The recent conflict in Libya was a heritage preservation victory built through collaboration. Archeologists from Europe and the US working together with the military placed archeological sites on the no-strike list, sparing precious antiquities.

Archeologists say the biggest challenge is identifying the places that matter to a community. Locals have to be consulted to determine whether a crumbling, ancient wall is an iconic site or an unwanted eyesore. With this information, archeologists want to create a global inventory that would serve military planners during conflicts, but also in natural disasters.

It's a massive undertaking that also has its risks since cultural heritage sites are often specifically targeted for destruction, particularly in ethnic conflicts.

"If you want to completely demoralize an enemy, you attack an iconic object," Rush said. "That's why al-Qaida chose to attack our Twin Towers because they were iconic for American society. My motto is that this kind of work is not for the faint hearted."

In the end, wars destroy and a mission to protect is difficult to achieve. Yet Rush and her colleagues are convinced that preserving the past will help people build a future.

Some three million books and countless artifacts were destroyed when Sarajevo's National Library was burned to the ground 20 years ago. It was a clear attack on the cultural identity of a people. (25.08.2012)

Listen to the report by Nancy Greenleese

Can you imagine soccer without music?

Many famous musicians have a special relationship with soccer. Ed Sheeran's support for his team, Ipswich Town, really is part of a time-honored tradition.