For the first time, archaeologists have excavated an entire thermopolium — a hot food and wine shop that served up the ancient equivalent of street food. The frescoed shop gives a rare insight into Greco-Roman life. 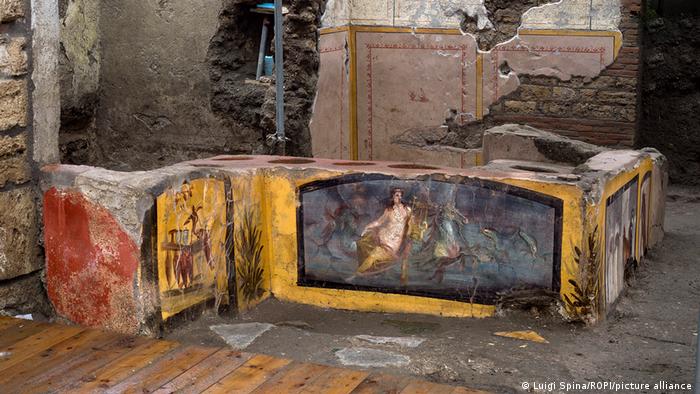 Archaeologists in Pompeii have unveiled an intact hot food and drinks shop which could provide valuable information on the gastronomic habits of people in the ancient city before it was buried in a volcanic eruption in 79 AD.

The thermopolium, which means a place where hot food and drinks are served, has led archaeologists to call it a "snack bar." Thermopoliums were very popular in the Roman world — Pompeii alone had 80 of them.

"This is an extraordinary find. It's the first time we are excavating an entire thermopolium," said Massimo Ossana, director of the Pompeii archaeological park, on Saturday.

Archaeologists found traces of nearly 2,000-year-old food in some of the deep terra cotta jars in the shop, including traces of pork, fish, snails and beef. The street vendor would have lowered the jars into the counter which contained circular holes.

"Our preliminary analyses shows that the figures drawn on the front of the counter, represent, at least in part, the food and drink that were sold there," said anthropologist Valeria Amoretti, adding that the discovery was a "testimony to the great variety of animal products used to prepare dishes."

At the bottom of one jar, archaeologists found crushed beans which were used to modify the taste of wine.

Brightly colored frescoes have been identified on the front of the store's counter, some depicting animals that were part of the ingredients in the food sold, including a chicken and two ducks hanging upside down.

Archaeologists also discovered a decorated bronze drinking bowl, wine flasks, ceramic jars used for cooking soups and stews and amphora used for storing or transporting liquids. They also found human bones near the snack shop, including those of a man in his 50s near a cot.

"The shop seems to have been hastily closed and abandoned by its owners, but it is possible that someone, perhaps the oldest man, stayed and died in the first phase of the eruption, during the collapse of the attic," Osanna said in an interview with Italian news agency Ansa.

The other body could be that of a "thief" or a "hungry fugitive surprised by the burning fumes with the lid of the jar he had just opened in his hand," he added.

About two-thirds of the 66-hectare (165-acre)ancient town of Pompeii, 23 kilometers (14 miles) southeast of Naples in Italy, has been uncovered. The ruins were not discovered until the 16th century, and excavations began in about 1750.