Arab League imposes sanctions on Syria | World | Breaking news and perspectives from around the globe | DW | 27.11.2011

The Arab League has approved economic sanctions on Syria for its continuing violent crackdown on protesters. Foreign ministers agreed to the measures in Cairo, which include travel and asset freezes. 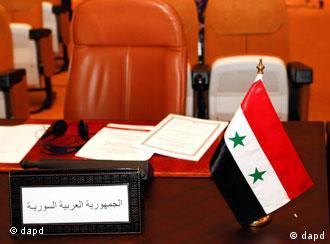 Syria is already suspended from the Arab League

The Arab League has approved sanctions against Syria to pressure Damascus over failing to end a bloody suppression of anti-government protests.

The Qatari prime minister said the Arab League had vote to ban prominent Syrian regime officials "from travelling to Arab countries and to freeze their accounts in Arab countries." He also said that the League's members would stop dealing with the Syrian Central Bank and suspend trade with the government in Damascus, with the exception of foodstuffs.

The sanctions, drawn up earlier by the league's economic committee, focus on cutting commercial links with President Bashar al-Assad's regime.

Dealings with Syria's central bank would be halted but basic essentials needed by the Syrian people would be exempted from sanctions.

"Trade exchanges between Arab governments and the Syrian government are to be halted, except for those related to the strategic goods needed by the Syrian people," the ministers said in a statement. 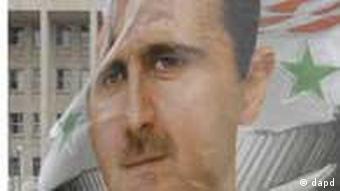 Officials in Assad's regime could be hit with a travel ban

The move comes after Syria failed to respect an Arab League deadline to let in monitors, part of a broader effort aimed at ending Assad's eight-month crackdown on protests in which the United Nations says 3,500 people have been killed.

The Syrian government has criticized the sanctions plan, saying the move amounts to interference in its internal affairs.

"What we understand by this latest Arab League decision is a tacit green light for the internationalization of the situation in Syria and to meddle in its domestic affairs," he said.

In a letter to the state-run SANA news agency, Muallem condemned the Arab League for asking the United Nations to contribute to any observer team as an invitation "for foreign intervention instead of a call to avoid it."

The foreign minister of neighboring Turkey, Ahmet Davutoglu, joined Sunday's meeting to harmonize Ankara's measures with those of the Arab League.

Meanwhile, violence continued in Syria with activists saying eight soldiers and members of the security forces were killed when army defectors attacked their convoy in north-west Syria.

A deadline set by the Arab League for Syria to allow entry to observers has passed without response. The League has threatened Damascus with sanctions as the regime continues to crack down on opponents. (26.11.2011)

The Arab League has called on the West to head a Syrian contact group to coordinate policy and decide on any future action against Syria, with Britain and France the Arabs' preferred leaders - much to Russia's distaste. (18.11.2011)

As Syria continues its violent repression of pro-democracy demonstrations, the European Union is reportedly planning new sanctions against the regime of President Bashar al-Assad. (13.11.2011)