Appropriation of Sufi poet Rumi sparks outrage in Afghanistan | Asia| An in-depth look at news from across the continent | DW | 09.06.2016

Where is Rumi from? Should his character be played by Leonardo di Caprio? These are the questions currently preoccupying Afghans and Iranians alike. Now even the Afghan government has waged into the debate. 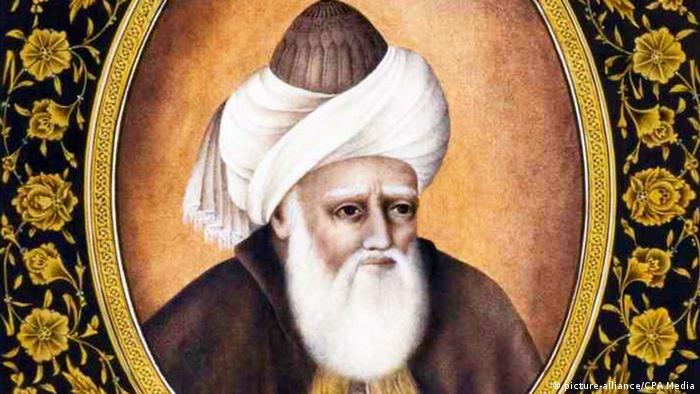 Everyone knows him. Everyone has heard his poems and it is very likely that they know a few by heart. Jalal al-Din Mohammad Balkhi, also known as Rumi, is one of the most famous poets and Sufi mystics in Persian-speaking countries like Afghanistan, Iran, Tajikistan and Azerbaijan.

But the 13th-century poet is currently a source of heated debates.

Oscar-winning screenwriter David Franzoni recently agreed to write the script for a biopic of Rumi. Although he said it was too early to begin casting, he would like Leonardo DiCaprio to play Rumi, and Robert Downey Jr. to star as Shams of Tabriz, the spiritual instructor of Rumi.

The news was not taken well by users on social media. Using the hashtag #RumiWasn'tWhite many criticized the preference of casting a white actor. Iranian artist Shahab Jafarnejad drew a cartoon depicting Leonardo DiCaprio as Rumi which quickly became popular.

"This is a new piece of news and we are still collecting information on this issue," says Haoon Hakimi, the spokesperson of the Afghan ministry of Information and Culture. "As soon as we have something, the ministry will share its views with the film makers."

To which country does Rumi belong?

This comes at a time when the Afghan government has expressed criticism over another issue concerning the famous poet. Turkey and Iran have shown joint interest over filing the Masnavi Ma'navi, Rumi's most important work, as their heritage in the UNESCO heritage list.

Rumi spent most of his life in Turkey and died in the city of Konya, which is popular amongst tourists. Iran claims Rumi was Persian since most of his work was in the Persian language. Afghans oppose this view, because Rumi was born in what is today Afghanistan.

That's why the Afghan government reacted swiftly and met up with Patricia McPhillips, the UNESCO representative for Afghanistan. "As soon as we heard about this matter, we contacted the representative of the UNESCO for Afghanistan and expressed our concern," Hakimi told DW. "Jalal al-Din Balkhi is our pride and we won't let any other country take this honor away from us."

McPhillips said she would report the Afghan government's views on this issue to the UNESCO headquarters in Paris.

Hundreds of people are expected to take part in the protests.

Sadeq Osyani, professor of literature at the University of Balkh, says the Sufi poet "actually has three homes."

"One is the whole world as his home, the second one is his home of language and the third is his birthplace in Balkh," he told DW.

Many users have commented on Rumi's background and supported the stance of the Afghan government. Journalist Frud Bezhan posted a picture of what is known as the birthplace of Rumi in northern Afghanistan.

Sayed Zafar Hashemi, the deputy spokesman for the Afghan president, calls on internationally famous Afghan writers to speak out on this case and reclaim Rumi's heritage.

At the same time, others have stressed that Rumi does not belong to one country, but rather to the entire world, which has benefited from his work.

Osyani agrees. "I don't think there was a need to claim Rumi as one's own before. Since his art and his impact belong to the world, but if you want to be specific you have to acknowledge that Jalal al-Din Muhammad Balkhi belongs to Balkh."

Jalal al-Din Muhammad Balkhi continues to be one of the most important figures in Islamic history and Persian literature. However, his impact transcends the Islamic world. His works are published in numerous languages around the world.

In the United States, Rumi is the best-selling poet and his poetry is often recited in the Western world. In 2007, the UNESCO celebrated the 800th anniversary of the birth of Rumi and declared the year as "International Rumi Year."