Anti-terror march in Munich ahead of NSU trial | Germany| News and in-depth reporting from Berlin and beyond | DW | 14.04.2013

'No to Nazi terror, state and everyday racism' was the slogan for demonstrators in Munich ahead of the planned trial for a member of the neo-Nazi National Socialist Underground terror group. 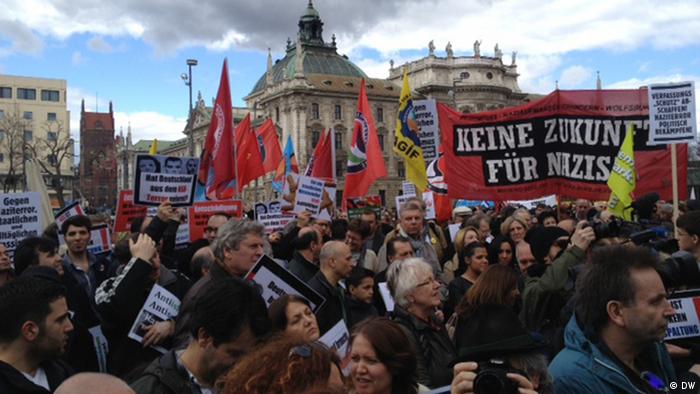 "Home is a feeling and not a country" were the words with which the German-Turkish-Italian rap group Microphone Mafia from Cologne greeted demonstrators on Saturday (13.04.2013). An estimated 5,000 people took part in a demonstration tied to the imminent start of the National Socialist Underground (NSU) trial in Bavaria's State Court of Appeals.

Anti-racist and anti-fascist protesters from around the country gathered in Munich to voice their opposition to right-wing extremism in Germany in a demonstration where organizers sought to include no flags and no nationalistic slogans.

"We want to show what brings us together and not what separates us. In doing so, we want to send a sign of solidarity to the victims and to those close to them. We want to turn our attention more closely to racist structures in society. And above all, we are seeking the abolition of the Federal Office for the Protection of the Constitution," said Bernd Kaminski, spokesman for the group, Alliance against Nazi Terror and Racism, that organized the demonstration.

In the anti-racism organization's view, Germany's domestic intelligence authority, the Federal Office for the Protection of the Constitution, tacitly allowed the NSU's right-wing terrorists to operate and, as such, is implicated in NSU crimes. Over 200 leftist organizations took part in the event, which also included Munich's Social Democrats (SPD) and members of the Green Party. 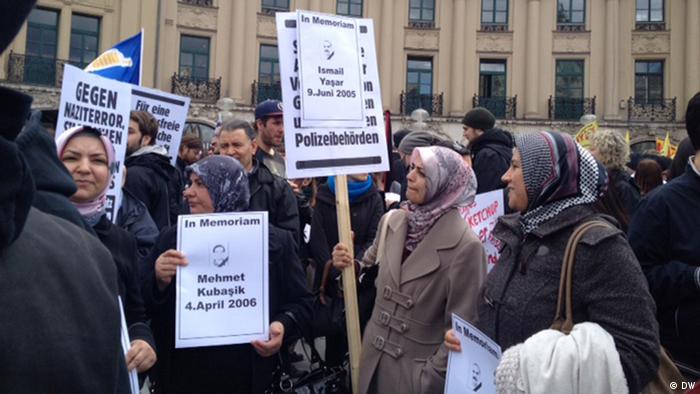 The rally drew protesters from across the country

The brothers Ibrahim and Namik Arslan also came to the demonstration. Both are among the survivors of a 1992 arson attack by neo-Nazis against apartment buildings occupied by Turkish residents in the northern German town of Mölln. Ibrahim Arslan, who was seven years old at the time, recalls that his family received a barrage of criticism following the attack.

"A victim doesn't have to listen to criticism - a victim needs clarity, needs to be able to build trust in the state. We, as victims, have no trust in this state," the 28-year-old said.

The widow of Theodoros Boulgarides, a Greek murdered in 2005 in Munich, said at the demonstration that her family had been under shock - initially on account of the murder, but then due to authorities' misguided suspect list. "Nearly eight years later, we are still in a state of disbelief," she said.

Investigators initially suspected Boulgarides was killed by someone among his family and associates before suggesting organized crime may have been involved. It's important, his widow said at the demonstration in Munich, that people don't stop asking questions. 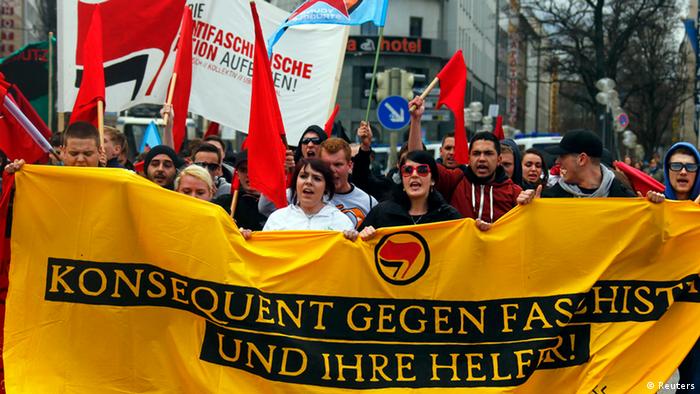 "With strength against fascists and their helpers" reads this protest banner

The nearly five-hour protest route concentrated on a few important historic squares that recall past attacks by Nazis, including Königsplatz and Odeonsplatz. The march also made its way to the area surrounding Munich's central train station, passing by countless Turkish and Greek businesses.

Photographs of the ten victims killed by the NSU were held in honor of those killed. And signs bearing slogans like "The problem is called racism" criticized the German state and the authorities' handling of right-wing violence in Germany.

German protesters were joined by a number of demonstrators now living in Germany, but from various ethnic and national backgrounds.

"As a Turk, I'm very happy to see so many Germans at this demonstration. That shows that not everyone is against foreigners," said 18-year-old Elif, who traveled with her entire family to the event from the small Bavarian town of Penzberg. Many other participants undertook longer journeys in order to be at the rally, including from Cologne, Frankfurt, Berlin and Hamburg.

Germany's Constitutional Court has ruled that foreign media should have access to the upcoming trial of suspected neo-Nazis charged with involvement in 10 race-related murders. DW takes a look at the pre-trial debacle. (13.04.2013)