The trial of Beate Zschäpe and four men charged with helping a neo-Nazi terror cell carry out 10 race-related murders reconvenes today after a week-long adjournment. DW is following the events. 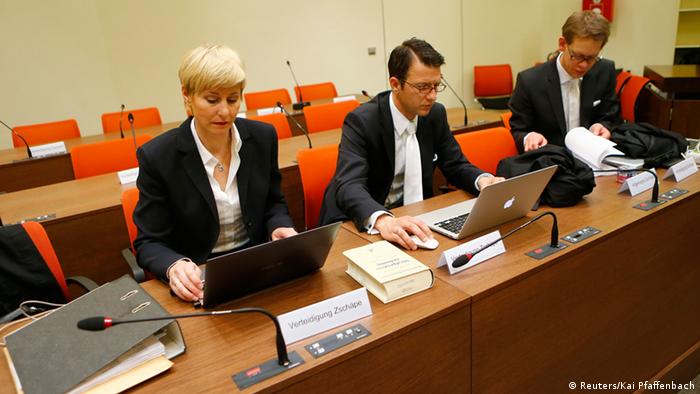 It is the biggest trial on far-right extremism in Germany since World War II, centering on Beate Zschäpe and the National Socialist Underground (NSU) neo-Nazi group she allegedly co-founded. Authorities hold the group responsible for the murders of eight Turkish men, a Greek man and a policewoman. Aside from Zschäpe, another four defendants stand accused of having supported the right-wing terror cell.

As legal proceedings get underway against the right-wing extremist group National Socialist Underground (NSU), the Munich court handling the case already has many turbulent weeks behind it. (05.05.2013)

The long-awaited trial of Beate Zschäpe and four alleged supporters of the National Socialist Underground (NSU) is set to begin in Munich. But who are the defendants charged with involvement in the killing 10 people? (05.05.2013)

The trial against alleged NSU terrorist Beate Zschäpe begins in May. Germany's attorney general has accused her of being an accomplice to the group's many murders. Her lawyers dispute that she was involved in any crimes. (16.04.2013)

The high-profile trial against alleged National Socialist Underground killers and accomplices is one of the most closely watched German cases in the post-war era. The panel of judges is under immense pressure. (15.04.2013)

Ankara has protested to Berlin after Turkish journalists were not allocated seats in the courtroom for a closely-watched neo-Nazi trial. But can - or should - politicians be able to influence the courts? (03.04.2013)

When the NSU trial finally begins, 77 plaintiffs will be watching. They want to shed light on the role of state authorities in the right-wing murder spree. (06.05.2013)

Journalists' seats for the trial of the neo-Nazi terror group NSU have been allocated by lottery. This ensures that foreign media can get seats but it means that many others will have to give up theirs. (29.04.2013)

The trial of accused NSU terrorist Beate Zschäpe begins in Munich on May 6. Although eight of the NSU's victims were Turks, no space has been reserved for the Turkish media in the courtroom. (27.03.2013)

The trial against five NSU terror suspects is set to open in Munich on May 6. After all the mistakes committed by German authorities, DW’s Volker Wagener hopes that there will be no further slip-ups. (15.04.2013)

'No to Nazi terror, state and everyday racism' was the slogan for demonstrators in Munich four days ahead of the planned trial for a member of the right-wing National Socialist Underground terror group. (14.04.2013)

Turkish politicians and media are criticizing German authorities on two fronts: for a neo-Nazi pre-court debacle and investigations into fires that injured Turks in Germany. Is Germany responding too slowly? (04.04.2013)

NSU trial adjourned for one week

Right-wing terror on trial - Beate Zschäpe and the NSU quagmire

Terrorist victims - the survivors speak out

NSU trial gets underway in Munich