Resignation sets in as neo-Nazi trial continues | Germany| News and in-depth reporting from Berlin and beyond | DW | 15.05.2013

Just two days into the trial of suspected neo-Nazis, considerably fewer journalists and demonstrators attended the proceedings. The drop in interest is attributed to resignation among Germans, one politician said. 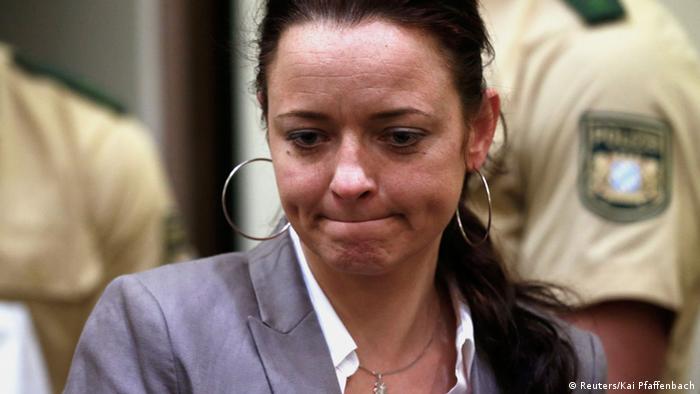 Ersan Eksioglu is disappointed. He and a friend seem somewhat lonely as they stand on a Munich street holding up a banner that reads, "We've integrated. Where is justice?" Other than a few cameras and photographers, hardly anyone takes notice of the 30-year-old or of the few other demonstrators. They are on the streets to protest against xenophobia in general and the suspected NSU neo-Nazi murders in particular.

The NSU in a video claimed to have shot dead 10 people between 2000 and 2007. Eight of the victims had Turkish heritage, another was Greek and one was a German police officer. The two alleged NSU killers Uwe Böhnhardt and Uwe Mundlos, who killed themselves in November 2011 while on the run from police, both came from the same part of eastern Germany as the policewoman. 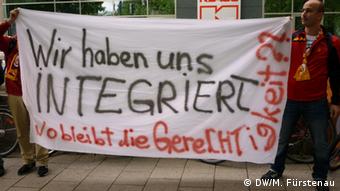 "We've integrated- where is justice?" the banner reads

Beate Zschäpe is the only surviving member of the terrorist trio and together with four other defendants linked to the NSU, she's currently on trial at a Munich court.

The fact that the NSU was able to murder and bomb for a decade without being tracked down has shaken many immigrants' faith in the German legal system. "It does make you think," said Eksioglu as he rolled up his banner. "Next time I'll show up wearing lederhosen."

Eksioglu was born and raised in Bavaria, he works as in sales in the mobile technology sector. Today he's wearing jeans with a red-orange shirt and scarf - the colors of Turkish soccer side Galatasaray Istanbul.

The man is a devoted fan of the Turkish champion. Last Sunday, the two Galatasaray stars Didier Drogba and Emmanuel Eboue were the target of racist attacks in their side's match against Fenerbahce Istanbul. Xenophobia knows no borders. Eksioglu who was born in Munich, knows that only too well. Whenever he has time he follows his team across Europe. Racism among football fans is a sad reality in most countries he's been to.

While the soccer season is on hold for the summer months, the NSU trial in Munich is finally picking up some pace. It is the second day in a trial that according to experts might last several years. 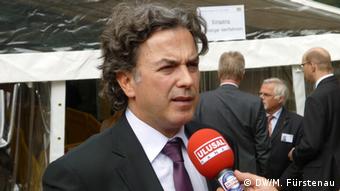 But there are already fewer spectators than when the trial opened. There are only few people outside the court and in the breaks between the proceedings it's mostly the joint plaintiff's lawyers who are giving interviews.

Memet Kilic, a member of parliament for the Green Party, said he was disappointed that the interest in the case already seems to be waning. He especially took time off from his duties in Berlin to attend the trial. On the first day he expected some 5,000 protesters. Instead an estimated 200 people showed up. After the trial was delayed a week, about 20 people came.

Kilic said he saw the lack of interest as a sign of "resignation" and the fact that the public got used to such news. In the 1990s there were racist attacks in Solingen, Mölln, Rostock or Hoyerswerda, people across Germany showed their protest and compassion with candle processions of hundreds of thousands showing their dismay and shock. The Greens politician said he wants to continue to follow the trial both by travelling to Munich and following the events from Berlin. 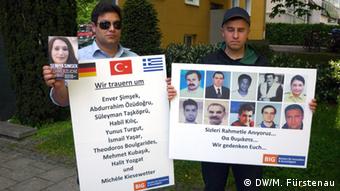 He said he also keeps track of the parliament's investigative commission looking into why police and domestic intelligence failed to track the terror cell while it was active. On Thursday, the committee is to meet a last time before it presents a final report this summer. In Munich, however, the trial hasn't even begun hearing the evidence.

Mustafa Can and Emre Tanis also had hoped for more progress. They left Berlin at 2 a.m. to be in Munich for the day. Already on the first day of the trial they protested with photos of the 10 victims suspected to have been murdered by the NSU terror cell. Can studies history and German as a foreign language in the eastern German town of Greifswald. Outside the court room he was asked by security staff whether he speaks German - right now he feels very foreign in what is supposed to be his home country Germany.

The trial of Beate Zschäpe and four men charged with helping a neo-Nazi terror cell carry out 10 race-related murders reconvenes today after a week-long adjournment. DW is following the events. (14.05.2013)