There was tight security around the courthouse as the NSU trial began in Munich on Monday. The case was later adjourned for one week after defense lawyers questioned the impartiality of the judges. 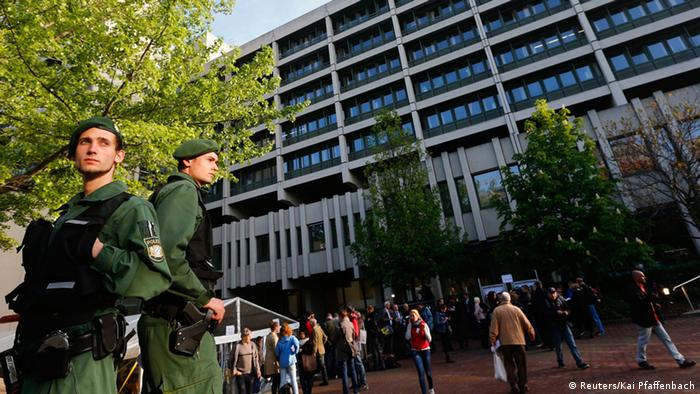 It is the biggest trial on far-right extremism in Germany since World War II, centering on Beate Zschäpe and the National Socialist Underground (NSU) neo-Nazi group she allegedly co-founded. Authorities hold the group responsible for the murders of eight Turkish men, a Greek man and a policewoman. Aside from Zschäpe, another four defendants stand accused of having supported the right-wing terror cell.

As proceedings got under way, emotions were running high outside the courtroom, yet the expected commotion did not materialize. "We think it's unfortunate that not very many people came," complained one demonstrator from Munich. Just one incident required police intervention.

Two women charged toward the courthouse, carrying a broken glass bottle, in an effort to enter the NSU courtroom. "We are fellow citizens of Turkish heritage, and we have the right to go in there. I want to go in now and know what's happening," shouted one of the women. The women also voiced their frustrations in Turkish into the microphones of a well-represented Turkish media. 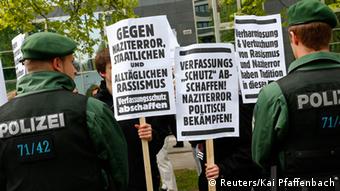 Protests began even before the mammoth trial began

Munich's mayor Christian Ude hurried over to serve as mediator. "I have spoken with victims' families in Munich who still deeply feel those frustrations for having themselves been viewed as suspects and being treated as such. One has to understand that emotions are still running high," the Social Democrat said of the episode.

Members of the umbrella organization for Turkish associations in southern Bavaria (TÜDEK) positioned themselves together with Munich's association for Greeks outside of the courthouse. TÜDEK's spokesman Mahir Zeytinoglu came to the opening day of the NSU trial wearing a traditional Bavarian jacket. "I've lived for more than 40 years in Bavaria. Bavaria is my home. This entire thing is terrible and makes me sad," he said.

In a speech in front of the courtroom, Martin Neumeyer, an immigration representative for the Bavarian government, appealed to those gathered, "the victims were killed because they were different. Let's show the criminals they are different. That they are the ones that don't belong to us, not to Bavaria and not to Germany."

Arrival for the trial

Oguz Ücüncü, general-secretary of the Turkish diaspora organization, the Islamic Community of Milli Görüs (IGMG), came from North Rheine-Westphalia for the start of the trial in Munich. Ücüncü feels personally connected to the victims. "Our organization was on the death-list for the NSU-trio." The lead-up had been going on for a very long time, and now it was fascinating to be here, he said. 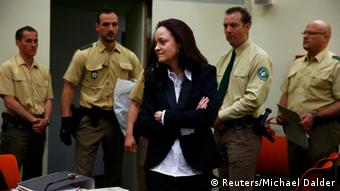 In the courtroom: the accused, Beate Zschäpe

Student Mustafa Can travelled from Berlin to be there. "My grandfather came from Turkey to Germany in 1961. He did the work that no one here wanted to do. We, his grandchildren, are now a part of Germany. We speak German, and pay taxes. But I don't feel at home here. I am German and have German citizenship. But I no longer feel safe here," Can told DW in an interview. Racism is on the rise, and he hopes the trial can contribute to solving the issue.

Verbal exchanges on the sidelines

Away from the media frenzy there has been violent altercations. "We have enough Turks in Germany as it is," said a passer-by trying to induce a reaction. The police took him into custody as he and another demonstrator began a heated exchange of words.

In a gesture of solidarity towards NSU victims, the court granted special permission for the Bavarian Turkish Community to lay a black wreath in front of the courthouse. Finally, a bunch of black balloons were released into the sky.

When the NSU trial finally got underway, 77 plaintiffs were watching. They want to shed light on the role of state authorities in the right-wing murder spree. (06.05.2013)

The high profile neo-Nazi trial of Beate Zschäpe and her NSU terror group has attracted a lot of foreign media attention. Zschäpe and four others are accused of 10 race-related murders. DW is following the trial. (06.05.2013)

As legal proceedings get underway against the right-wing extremist group National Socialist Underground (NSU), the Munich court handling the case already has many turbulent weeks behind it. (06.05.2013)