Opinion: Good decision ahead of NSU trial | Germany| News and in-depth reporting from Berlin and beyond | DW | 15.04.2013

Germany's top court has ruled that foreign media will be admitted to the courtroom at the NSU trial. The judgment says transparency is vital. DW's Ute Schaeffer explains why that's a good decision. 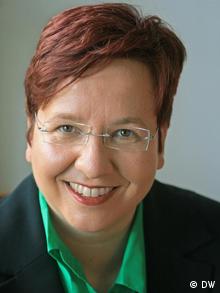 Ute Schaeffer is DW's editor in chief for regionalized content

Germany's highest court, the German Constitutional Court, passed a judgment that could already have been passed by the judges at the Oberlandesgericht (high regional court) in Munich: The court's ruling says that an appropriate number of foreign media outlets must be allowed to attend the NSU trial.

The decision finally puts an end to the growing tension that could be felt surrounding media coverage of one of the biggest trials in post-war Germany. It was a good decision. The tug-of-war concerning the question of whether journalists from Turkey and other countries would be admitted at all, and if so, how many of them would be admitted, shed a negative light on Germany in international media reports, especially in Turkey.

The high court judges didn't base their ruling on political reasons, but on the fact that the right of equal chances in editorial competition had been violated. The decision is proof of political intuition, because the court managed to resolve an argument which would have tarnished the NSU trial. It came at the very last minute. After all, the German and international public will have their eyes on the trial for the next two years.

It was the right decision also from a political perspective. Courts in Germany do rule independently on media admission procedures. But on the other hand, it's crucial for the functioning of the German judiciary that trials be held publicly. Germany has a law which leaves no room for misinterpretation: "Trials…including the delivery of the judgment and the rulings are public." Public dealing with trials and transparency are valuable assets. They are what differentiates a state that's based on the rule of law from those that aren't.

How does Germany deal with it?

Germany doesn't have show or mock trials like countries in other regions of the world. Legal investigation procedures in Germany are transparent; they follow the principle that there is nothing to hide. Everybody is treated the same way. The media have the role of informing about them. That's what forms the basis of a public debate and what guarantees transparency. Public debate and transparency are the pillars for states that are based on the rule of law and they are what makes the system credible.

That's particularly important when it comes to the NSU trial, which can already be called a "historic" trial. A German court is dealing with right-wing terrorism. The right-wing group allegedly killed 10 people, among them a produce shop owner and the owner of an Internet café – citizens who were murdered because of their Turkish or Greek origins. Naturally, the way German authorities deal with those cases is watched closely in Germany, but also abroad. Over the past 25 years, 150 people in Germany have fallen victim to right-wing violence. Foreign media have raised the question: Just how widespread is right-wing extremism in Germany?

The NSU trial is more than a domestic affair. The whole world has its eyes and ears on the trial. That's why we should do all we can to ensure that people abroad can indeed watch and listen. It's the only way we can counter the impression expressed in foreign media that different standards are applied, that there is a lack of determination in decision-making and that not enough commitment is shown to shedding light on these events.

In principle, the NSU trial is tasked with the criminal and legal investigation into the murders. But in the eyes of the national and the foreign public, the trial serves a bigger purpose: it also has to shed light on mistakes made during the investigation of the right-wing murder spree. How was it possible that authorities turned a blind eye, that important files were destroyed, that the various German domestic intelligence agencies didn't work together?

In many respects, the German legal authorities charged with shedding light on right-wing violence failed. People in Germany and abroad now want to know how Germany's judiciary will deal with that problem. The trial has become a matter of public interest. That in itself is proof that there is nothing to hide, and that the questions will be answered!