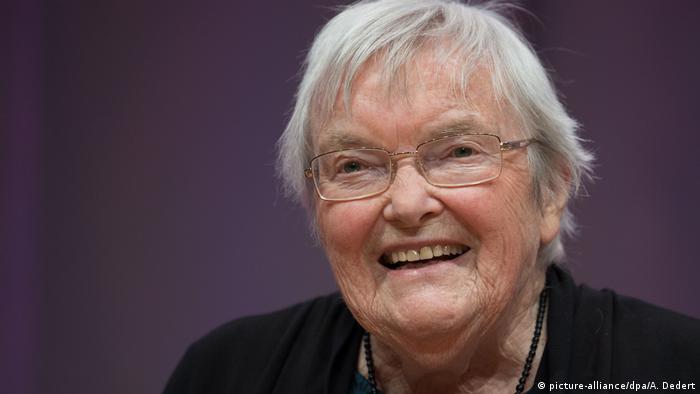 Gudrun Pausewang could be called an "early Greta Thunberg." The German writer never stopped pointing a finger at political inactivity. Her 1959 debut, Rio Amargo, was an immediate success with the public. The 1972 fairy tale Hinterm Haus der Wassermann (Aquarius behind the house) marked the beginning of a successful career writing books for children and adolescents. Promoting the protection of the environment and peace, as well as dealing with Nazism were some of the issues dear to her heart.

Gudrun Pausewang died at the age of 91 near Bamberg on January 23.

Social media abounded with tributes to her works on Friday, when news of her death was made public. The Haus der Geschichte museum in Bonn shows a photo of a button that reads "Gudrun-Pausewang School" and reminds readers that several schools were named after the German children's book author.

Read more: Only for children? What's missing in 'When Hitler Stole Pink Rabbit'

Pausewang inspired young readers with her novel from 1983, The last children of Schewenborn, which depicts life in a small town in Germany where a nuclear attack takes place in a Cold War context.

In the 1987 novel The Cloud, she described the consequences of a fictitious nuclear reactor accident. Reaction was mixed but all the same, the book was a bestseller just a year after the Chernobyl nuclear reactor disaster on April 26, 1986. It was a must-read for supporters of the anti-nuclear movement, and a classic on high school reading lists, where it influenced generations of students. Sales of the book also surged following the Fukushima nuclear disaster in Japan in 2011.

Dealing with her own Nazi past

Born on March 3, 1928 in Wichstadtl in Eastern Bohemia, Pausewang grew up in a family of staunch Nazis. She, too belonged to the League of German Girls, BDM, the girls' wing of the Nazi party youth movement.

It wasn't until after the death of her father and the family's escape to West Germany right after the war that she realized the scope of the Nazi regime's crimes. "I believed in Hitler and his message until the end," she said in an interview in 2011. "Years after the war, I began to realize that it was not enough to be asked at the ballot box every four years what I wanted the country's political makeup to be," she added.

Among her novels set during World War II, three titles are available in English: The Final Journey, Dark Hours and Traitor.

A school teacher, the writer lived and worked in Chile, Venezuela and Colombia for a few years. From 1972, she taught at a primary school in the German start of Hesse. At the age of 70, she wrote her doctoral thesis on "Forgotten youth writers of the Erich Kästner generation."

The author of 86 novels, Pausewang received several awards for her literary work, most recently the German Youth Literature Prize in 2017 for her life's work.

Germans are very attached to the books they grew up with as children, which is why they often end up reading these classics to their own kids later on. Here are some of the country's most famous authors. (13.12.2017)

The Green Party's Robert Habeck came to the forefront following the 2021 general election, which saw his party double its seats. He took on one of the biggest ministries in the new coalition government.

Brezna combines literary and journalistic elements in her reports and novels. The writer's association recognizes her commitment to giving a voice to dissidents.