After decades in power, Angola's President Jose Eduardo dos Santos will not take part in Wednesday's elections. Many Angolans now hope for a political change, as Antonio Cascais reports from Luanda. 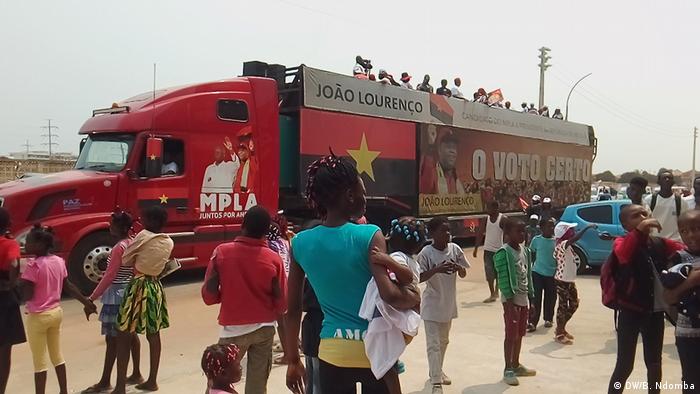 "Long live Angola! The fight continues! Victory is certain!" hailed Angola's long-term President Jose Eduardo dos Santos in last Saturday's appearance at the ruling People's Movement for the Liberation of Angola (MPLA's) party campaign rally. His appearance was brief, essentially limited to reverberating the party's well-known slogans. Dos Santos said he was sure the MPLA will win the elections on August 23 and wished his designated successor Joao Lourenco success.

Not so many Angolans disagree with dos Santos' predictions. According to a 35-year-old hip-hop artist, Luaty Beirao, elections in Angola are "like an old cinema film, which is always being re-released." Beirao said young Angolans want "change, new faces, and different politics." But the same party always ends up wining. This was the same case in the 1992, 2008 and 2012 elections.

'Control delusion' of the ruling party

Luaty Beirao sits on a park bench at the "Marginal", a promenade in Luanda, and looks out to the sea. The Pracht Street was redesigned shortly before the 2012 elections for around 340 million euro ($400 million). Shortly before the elections, new public buildings were inaugurated including roads, tunnels, and dams. Beirao's meetings with DW's reporter was fixed through different social media networks and re-arranged several times. His said government agents listen in on his phone calls. He thinks the governing party is suffering from control delusion and suspicious of any opposing voice. 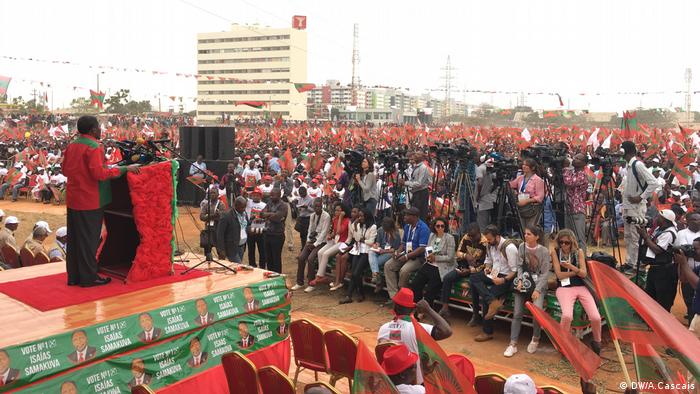 Beirao is part of a small group of young people fighting the regime of President dos Santos. He has been arrested several times. In 2015, he went on hunger strike for a week as a prisoner of conscience. He has not given up his fight until today and continued to protest during the election campaigns. He and his colleagues demonstrated against the government's restrictions on freedom of assembly for civil society groups directly in front of the Ministry of the Interior.

Beirao often criticizes shortfalls in Angola. "It's a shame on the ongoing election campaigns," he said. "We had merciless media propaganda for a month against a particular party. Many voters, especially those of the opposition, are experiencing a massive reduction in their right to vote because they are allocated to polling stations far from their homes, some in a different region."

"All parties are equal, but one party is more equal than others"

In fact, the governing MPLA dominated the four week election campaign period, which ended on Monday. If size and number of the campaign bills were to be counted, then one would have to speak of a massive victory for MPLA against the five opposition parties.

In terms of media presence, Beirao said there was no "equal treatment of all parties," as provided for in Article 64 of the Angolan Electoral Code. Both state and private television stations broadcast several election campaigns of the government candidate live and in full length. The oppositions' campaigns, on the other hand, were given short air time.

Opposition groups are also suspicious of the composition of the electoral commission. According to the 2011 electoral laws, their members should be independent. But 10 of the 17 members of the commissioners were appointed by the government. Among them are the president and the parliamentary speaker. 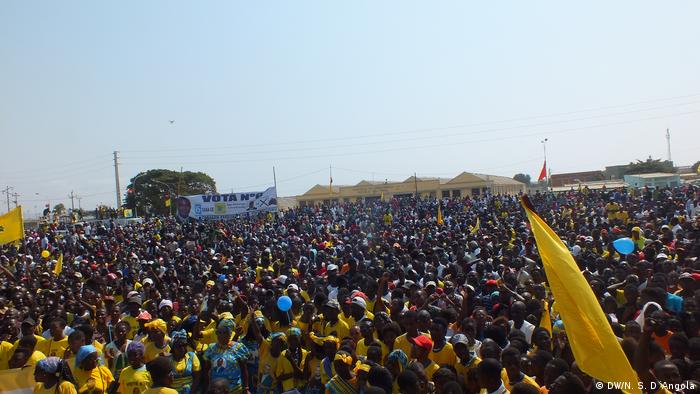 Change at the top: But who will be the new man in the high castle?

On the streets of Luanda, the mood for change is noticeable. The economic situation is catastrophic; low oil prices on the world market tore deep holes in the state's budget. Unemployment is on the rise. Many young Angolans that DW spoke to said they need a new government that will tackle the biggest problems facing youths, which are unemployment and the lack of training opportunities.

For many Angolans, the desire for change is met by the fact that long-term president dos Santos is not going away after 38 years. Most Angolans have never experienced any other head of state. The fact that the party wants to put a new man at the head of the state, is understood by many as a sign of change.

But human rights activist Luaty Beirao disagrees. He thinks if Lourenco is elected, he will primarily represent the interests of the outgoing president and not meddle with any of his previous decisions. In addition, dos Santos will remain chairman of the governing party until 2018. Beirao said that the loyalties of most lawmakers first of all belong to the ruling party because the president is not directly elected by the people of Angola, but rather by the largest political party. The question is, "Who is the most powerful man in the country? The new president or the old and new party chairman?"

Man of continuity or a man of change?

In the election campaigns, Joao Lourenco showed he has mastered this balance quite skillfully. His electoral slogan was "Keeping the good - improving the less good!" A slogan that still sounds appealing to many Angolans.

His sharpest competitors - Isaías Samakuva from the former rebel group UNITA and Abel Chivukuvuku of the CASA-CE, which was founded in 2012, rely on the desire of many Angolans for change. They promise corruption-free policies, more freedom and, above all, justice. The charismatic Chivukuvuku said on his final campaign rally last Sunday that the immeasurable riches of the country would be equally distributed among the population. Apart from the MPLA, the UNITA and the CASA-CE, three other parties are also vying for the votes of the approximately 9.5 million voters.

However, one thing is certain ahead of Wednesday's election; another person other than Jose Eduardo dos Santos will be at the helm of Angola. Everything else remain open: will the "new person" come from the ranks of the MPLA or from the ranks of the opposition? And will he choose continuity or change?

Many killed in stampede at Angola soccer stadium

At least 17 people have died in a stampede at a football match in the northern city of Uige in Angola, located some 250 kilometers from the capital, Luanda. Dozens more were reported injured in the incident. (11.02.2017)

Protests against abortion bill in Angola

Some 200 demonstrators have protested in Luanda against a draft law criminalizing all abortions to be voted on next week. Angola has one of the world's worst health care systems.  (18.03.2017)

The world's most expensive cities

Hong Kong has snatched the prize for the priciest cost of living for expats from Luanda, the capital of Angola. German cities meanwhile landed in the middle of Mercer's annual rankings. (22.06.2016)