Protests against abortion bill in Angola

Some 200 demonstrators have protested in Luanda against a draft law criminalizing all abortions to be voted on next week. Angola has one of the world's worst health care systems. 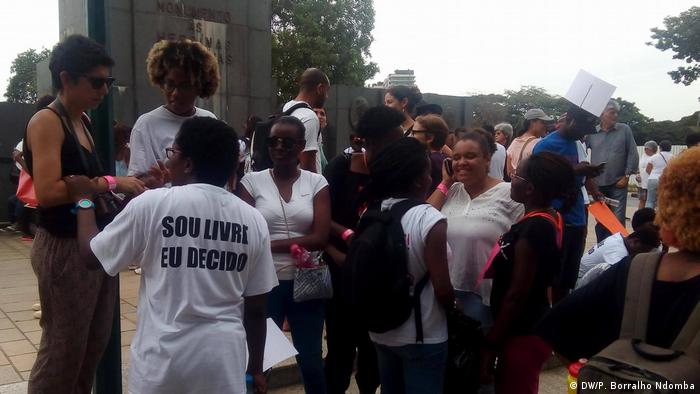 The protesters gathered on Saturday in the center of the capital, chanting "Freedom for women," "Prison will not solve anything" and "Let us decide," before dispersing after about two hours.

The draft penal code punishes anyone who has an abortion or performs one with up to 10 years in jail. It offers no exceptions to the punishments for those who have or perform abortions.

The government had proposed exceptions in cases of rape or when the mother's health is in danger, but parliament rejected these after lobbying by the Catholic Church.

Parliament is expected to vote on the criminal code on Thursday, March 23.

Angola, which had been ruled by President dos Santos since 1979, is updating its 1886 penal code dating back to the Portuguese colonial era.

Protests rare
Public protests are rare in Angola and can often be targeted by Angola's security forces, but the peaceful march was allowed by authorities.

"The government or lawmakers have no right to decide whether we must have a child or not," Lauranda Gouveia, a marcher, told the French news agency AFP.

"If this law is passed, women who get pregnant after rape will have the choice of trauma, prison or possible death after a clandestine abortion," added Sizaltia Cutaia, of the local Open Society activism group.

Isabel dos Santos - reported to be the richest woman in Africa, who is also the daughter of veteran President Jose Eduardo dos Santos - has been very critical of the bill. She used her Instagram social media account to denounce the "criminalization of women."

A spokesperson for Angola's Catholic community, Manuel Imbamba, said that it supported the anti-abortion law, saying "life cannot be negotiated or trivialized."

Imbamba said earlier this week that the church regretted the "banalization" of the issue as protest organizers moved ahead with their plans.

Angola faces an important presidential election in August as President Jose Eduardo dos Santos, one of Africa's longest-serving leaders, has announced he will not run again after 38 years in power.

One foot in jail: The Angolan Rapper MCK