Germany's conservatives have finally found common ground on migration policy, but skepticism is rife. The proposed measures have also raised concerns over the future of the open-border Schengen Area. 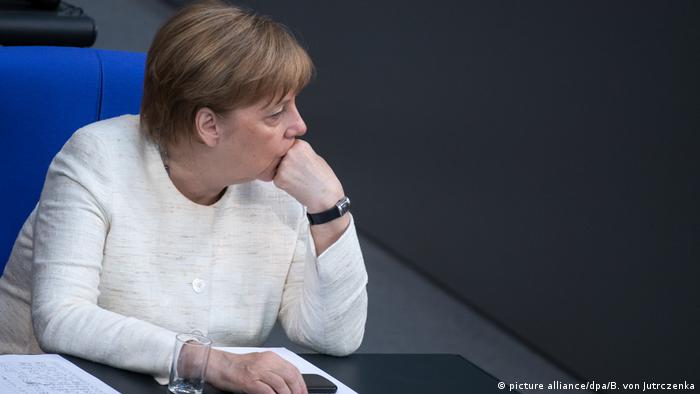 "I think it would now be good if we could start work, in a calm manner, in other political areas," German Chancellor Angela Merkel was quoted as telling her conservative delegates on Tuesday. Her comments were hardly surprising after the theatrical escalation in Berlin over the past two weeks.

But the morning after Merkel and Interior Minister Horst Seehofer reached a last-ditch compromise on migration policy, Berlin was anything but calm or quiet.

Now the ball is in the center-left court of the Social Democrats (SPD) — the other player in the grand coalition. Without a green light from the SPD, new measures can't be implemented. SPD party leader Andrea Nahles said there was "still a lot that needs to be discussed."

The deal hashed out between Merkel and Seehofer — also the leader of the CSU, the Bavarian sister party to Merkel's CDU — plans to implement transit centers at the German-Austrian border where migrants will be held until they can be deported to the EU country they first registered in.


In forming the long-awaited new German government earlier this year, however, the SPD made its opposition to closed migrant centers at borders clear — a stance which was reiterated by several SPD delegates on Tuesday.

"Transit centers are in no way covered by the coalition agreement," Aziz Bozkurt, the SPD's expert on migration, told German newspaper Die Welt, adding that the camps were "above the SPD's pain threshold."

Should the SPD agree to the new measures, the interior minister will have largely got his own way, despite Merkel pushing for a migration policy at EU level.

Seehofer has been critical of Merkel’s open-door migration policy since late 2015. He's doubled down on this stance since his party suffered losses to the far-right, anti-immigrant Alternative for Germany party (AfD) in last September's federal elections, despite comfortably retaining control of the conservative heartland.

Now, with just over three months to go until state elections in Bavaria, electioneering is high on Seehofer's agenda. The recent rebellion over migration policy seems to have backfired, with the CSU dipping in polls in Germany's southernmost state.

But the repercussions of the planned border controls could be felt well beyond the borders of Bavaria. Now the future of open-border travel across the 26 member states of the Schengen Zone could be threatened by stricter controls on the Bavarian-Austrian border.

Remarks from neighboring Austria on Tuesday hinted at a potential domino effect in Europe, with member states taking increasingly restrictive measures to shut out migrants.

Responding to the German conservatives' deal, Vienna said it was prepared to take unspecified measures to "protect" Austria's southern borders with Italy and Slovenia if its neighbor turns back migrants.


Seehofer, however, said he spoke to Austrian Chancellor Sebastian Kurz early on Tuesday morning and wanted to travel to Vienna "as soon as possible," adding that he also planned to hold talks with Italy's new government.

Skepticism over the stability of the conservatives and the governing coalition was also voiced on Tuesday by German economists.

"Tensions within the government camp are by no means over. This harms Germany not only politically, but also economically," said German Institute for Economic Research (DIW) President Marcel Fratzscher.

Gustav Horn, head of the IMK Institute, which is close to the CDU/CSU, also said the migration agreement was unlikely to bring long-term stabilization to Germany’s conservatives.

"It’s frightening how little is needed to trigger such a crisis. All of this is a sign of a decline in the political system as we know it," Horn said. "Germany and Europe are facing uncertain times."