US Commerce Secretary Wilbur Ross has told a Berlin audience that the US remains open to a free trade pact with the EU. German Chancellor Angela Merkel welcomed the proposal, but chided the Trump administration on trade. 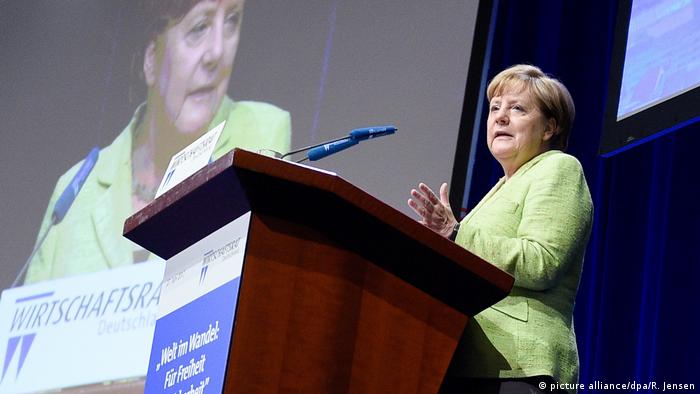 German Chancellor Angela Merkel on Tuesday called on the US and European Union to resume talks on a free trade agreement after the Trump administration gave the clearest signal yet that it was willing relaunch negotiations on such an accord.

Speaking at an economic symposium hosted by her Christian Democratic Union (CDU) party in Berlin, Merkel told lawmakers that "we should resume work on a trade agreement between the EU and the United States," adding that "the multitude of problems that arise ... can only be dealt with in structured trade negotiations with each other."

Read more: Opinion: Germany's trade surplus is made in US

The chancellor's comments came just after Wilbur Ross, the US commerce secretary, addressed the audience of delegates via video-link, telling them US President Donald Trump was receptive to talks on what is known on the Transatlantic Trade and Investment Partnership (TTIP) to resume.

The US president, who was elected to the White House after campaigning on a protectionist platform, has recently set his sights on tackling America's trade imbalance. Trump has expressed frustration with Germany, following reports that its trade surplus over the US last year amounted to some $65 billion (57 billion euros).

During last month's NATO summit in Brussels, Trump is reported to have told leaders, "The Germans are bad, very bad ... Look at the millions of cars they sell in the US. Terrible. We'll stop that."

However, speaking just after Ross on Tuesday, Merkel used her speech to stress that the US was a direct benefactor of German trade, saying that German investments in the US were a major jobs creator for the country. "The fact that BMW's biggest car factory is not in Germany but in the US must also be kept in mind when considering trade balances," she said.

Read more: German economy is responsible for 4.8 million jobs in the EU

US Commerce Secretary Ross had hinted last month in an interview with US media that the Trump administration would be "open" to resuming talks on a free trade pact with the EU.

However, his speech on Tuesday was the clearest signal yet that talks could resume. "I stand before you tonight to say this in a more explicit fashion: we, as major trading partners of each other, should have a free trade agreement," Ross said.

Initial talks on creating a free trade area on both sides of the Atlantic had been ongoing for years, but came to a halt following Trump's election to the White House.

Trump campaigned on a protectionist platform and on a repeated mantra of "America first." One of his first acts as president was to withdraw the US from a similar free trade deal with the Asia-Pacific region.

European lawmakers also assumed that the TTIP deal was off the table under a Trump presidency.

However, Ross told German lawmakers that the Trump administration sees "little point in negotiating treaties that will not be honored" and that the US has in Europe "a good counterparty with whom we have had, and will continue to have, productive discussions that benefit all."

US President Donald Trump has lashed out against Germany once more on Twitter, criticizing its trade surplus and lack of payments to NATO. Things will change, he warned. (30.05.2017)