Angela Merkel opens up on Ukraine, Putin and her legacy | Germany | News and in-depth reporting from Berlin and beyond | DW | 07.06.2022

Angela Merkel opens up on Ukraine, Putin and her legacy

Former German Chancellor Angela Merkel defended her legacy on Ukraine on Tuesday in her first major interview since leaving office.

She refused to apologize for her policies towards Moscow, but stressed there was no justification for Russia’s invasion of Ukraine.

"It's an objective breach of all international laws and of everything that allows us in Europe to live in peace at all. If we start going back through the centuries and arguing over which bit of territory should belong to whom, then we will only have war. That's not an option whatsoever."

Merkel: No excuse for Putin's war in Ukraine

The former chancellor insisted she had not been naive in her dealings with Russian President Vladimir Putin.

"Diplomacy isn't wrong just because it hasn't worked," she said. However, she never believed he could be won over by trade promises. "Military deterrence is the only language he understands," she said.

Merkel recalled a 2007 summit in the Russian resort of Sochi. Knowing Merkel's dislike of dogs, Putin famously encouraged his own dog to approach the German chancellor.

Putin told her that the collapse of the Soviet Union had been "the worst event of the 20th century." Merkel replied that for her, as someone who grew up in communist East Germany, the fall of the Berlin Wall meant she could live her life in freedom.

It was obvious already, she said, that there was a "great discrepancy."

Putin, she said, "hated" the Western model of democracy and wanted to "destroy" the European Union.

Merkel defended her opposition to Ukraine and Georgia joining NATO in 2008. At the time, NATO pledged that the two countries would join at some point in the future, but declined to trigger the "membership action plan" to let them join the alliance within five to 10 years.

In April, Ukrainian President Volodymyr Zelenskyy hit out at Angela Merkel and former French President Nicolas Sarkozy, suggesting their move had been a clear "miscalculation" that emboldened Russia. The Ukrainian president made his remarks after alleged human rights violations by Russian forces came to light in Bucha.

In Tuesday's interview, Merkel said that if NATO had granted them membership, Russian President Vladimir Putin could have caused "enormous damage in Ukraine." As it was, Russia invaded Georgia less than six months after this declaration in Bucharest, instigating Europe’s first war in the 21st century. Merkel also cited systemic corruption issues in Ukraine as reasons to block their membership.

"President Zelenskyy is bravely fighting against corruption, but at the time, Ukraine really was a country governed by oligarchs, and so there you can't just say 'ok tomorrow we'll take them into NATO,'" she said.

"It was not the Ukraine that we know from today. It was a Ukraine that was very, very divided politically," she said. "It was not a stable democracy. And when you accept a country into a NATO — and the Membership Action Plan is the clear precursor to that — you have to know that we are then prepared to really defend such a country if there is an attack."

"Secondly, I was very sure … that Putin is not going to just let that happen. From his perspective, that would be a declaration of war." 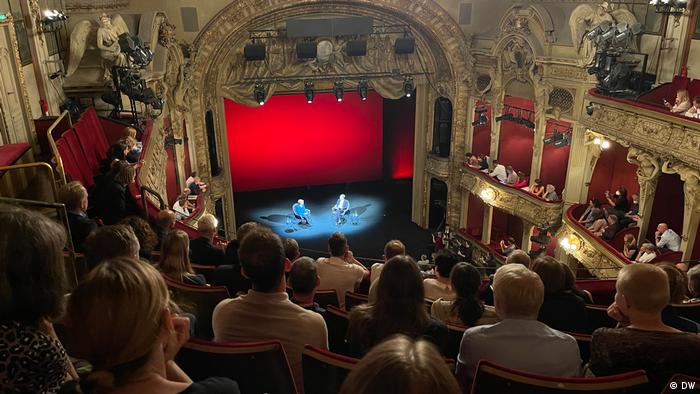 Merkel on the Minsk agreement

Merkel said the Minsk agreement — a 2014 deal she helped broker to ease the conflict between government forces and Russian-backed separatists — while not entirely palatable to the Ukrainians, bought important time for Ukraine.

"This agreement was commended, approved, welcomed by the EU. This agreement has been incorporated into a UN Security Council resolution, so it has the character of international law," she said.

"At the time, it brought calm and gave Ukraine, for example, a lot of time, seven years, to develop into what it is today."

Merkel conceded that there could have been a harsher response to Russia's 2014 annexation of Crimea, but that serious steps had been taken. She cited Russia's exclusion from the Group of Eight (Leading Industrial Nations) and NATO's stipulation that members spend 2% of GDP on defense.

By the end of her chancellorship, it was clear that Russia was moving in the direction of conflict, she said. And that Russia was finished with the Normandy format talks [between Germany, France, Ukraine and Russia].

"I don't blame myself for not having tried hard enough," Merkel responded to a question about how much she could have done to prevent an escalation with Russia. "I tried sufficiently. It is a great sadness that I did not succeed."

Merkel on the US and Nord Stream 2 sanctions

The former chancellor also touched briefly on the controversial, now-mothballed Nord Stream 2 pipeline, largely to criticize the US decision to sanction entities over their participation in the gas project.

"Basically, they sanctioned us as allies because of a different political opinion."

"What we have learned is Putin attacked Ukraine even though Nord Stream 2 was not yet in operation. So he didn't wait, but that this was a geopolitical goal of preventing a country on his doorstep from choosing another model, which he describes as Western-influenced."

She said that given Russia’s proximity to Europe, it was politically impossible not to trade with each other. However, she denied believing that she thought it was possible to transform Russia through trade.

Merkel's government has been criticized for steering Germany into its considerable dependency on Russian oil and gas. Yearslong construction of the Nord Stream 2 pipeline to carry Russian fuel directly to Germany was officially completed and ready to begin operation before it was put on indefinite hold by current Chancellor Olaf Scholz just days before Russian forces launched their assault in February.

But Germany's "appeasement of Russia" runs through decades of German foreign policy. The clearest shift in stance came under former Chancellor Willy Brandt, a Social Democrat, whose 1969 "Ostpolitik" was reviled by conservatives. Successive West German and reunified German governments, including those headed by Merkel, then continued to pursue a policy of constructive cooperation.

Opinion: Merkel fails to show self-criticism over her Russia policy

For some Germans, Angela Merkel's first public appearance since retiring as chancellor was as eagerly expected as the British monarch's platinum jubilee. But DW's Anja Brockmann was disappointed.

Russia and Ukraine: Chronicle of an undeclared war

The roots of conflict between Russia and Ukraine run deep. It all boils down to Moscow's unwillingness to accept Ukraine's independence. An overview.