The German chancellor's first stop as her re-election campaign resumes was a site from the country's Communist past - Berlin's Hohenschönhausen Prison. What message was she trying to send? 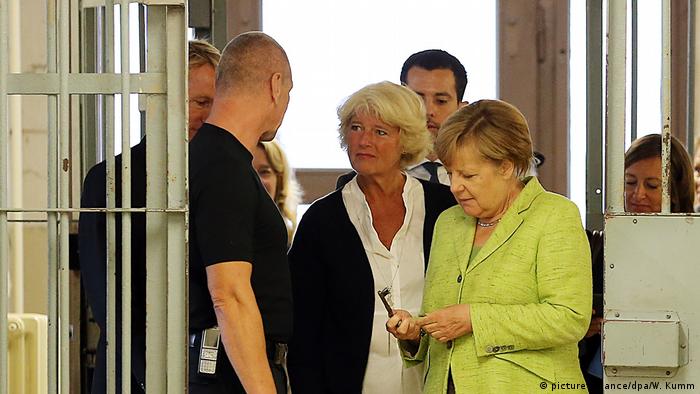 Angela Merkel's first official appearance after returning from her summer holidays was a place where the communist regime in East Germany housed political prisoners and is now the site of a memorial museum. The Hohenschönhausen Investigative Prison in northeastern Berlin was the central jail of the feared East German Secret police, the Stasi. Some 11,000 so-called enemies of the state were incarcerated here from 1951 to 1989.

The federal government has pledged 8.8 million euros ($10.3 million) for the modernization of the facility, and after taking a roughly one-hour tour that included one of the prison cells and the permanent museum exhibition, Merkel said it was important for Germany to remember its communist past.

"The injustice that happened in East Germany must not be forgotten if we are to appreciate the freedom we enjoy today," said Merkel, who grew up in the former East Germany. "What we today take for granted wasn't self-evident at all for many, many years."

Merkel said the memorial offered visitors "very authentic, painful and moving" contact with the past, and she thanked the two former prisoners who had helped lead her around the facility.

"Especially a few days before the anniversary of the construction of the Berlin Wall on August 13, 1961, visiting this memorial has special meaning for me," Merkel said. "It seems like a long time ago, but it reminds us to forcefully support freedom and democracy."

Merkel didn't fail to mention the memorial center's work "against left-wing radicalism," perhaps a hint of the political agenda that also underlaid her visit. Germany's communist past remains something of an embarrassment to the German left, and putting it briefly in the spotlight can't hurt the chancellor's re-election chances.

More than anything, though, Hohenschönhausen remains a site of intense personal suffering for those held prisoner there.

Nightmares about being arrested

DW had the chance to speak with a former prisoner who served as one of Merkel's guides. Eighty-three-year-old Arno Drefke spent five-and-a-half years in Hohenschönhausen in the 1950s for military and economic espionage. He described the psychological pressure on inmates, who were often kept in solitary confinement, deprived of sunlight and sleep, and subjected to constant questioning.

"After three days my nerves were totally shot, and I told the interrogator everything," Drefke said.

As a young man in East Germany, Drefke began to turn against communism after he noticed how full shops were in West Berlin. At the age of 18, he contacted a staunch anti-communist group in the West that was later banned for radicalism. One year later, in 1953, he was arrested in the East for smuggling in a pamphlet about the economic disparities between the two systems.

He was sentenced to life in jail and, like many prisoners, forced to work on the construction of the Berlin Wall, before being released in 1962 because East Germany was suffering from a dramatic shortage of labor. He says revisiting Hohenschönhausen, often as a guide, has helped him come to terms with the past. But it wasn't easy.

"The first time I was here after it was opened up to the public was in 1992," he told DW. "Afterward I felt really bad. I had nightmares about being arrested, again and again. I'd start screaming, and my wife would often have to wake me up."

The Berlin Wall fell in 1989, and the successor to the Socialist Unity Party that ruled East Germany - today's Left Party - is an established part of the parliamentary democracy in the Federal Republic. But speaking in the basement of Hohenschönhausen, Drefke had a message for them.

"I'd like to bring someone from the Left Party here and show them around," the former inmate said. "But they all give this place a wide berth. Unfortunately."

Embarrassing the Left Party, and politicians on the left in general, was probably part of Merkel's rationale for visiting Hohenschönhausen. But before the gates of the Stasi prison, she encountered a group of protesters critical of her own government's treatment of those who left the East for the West.

East Germans who fled to the Federal Republic were promised the same pensions as West Germans. But after reunification, they were reclassified as East Germans and today get less to live on than their fellow citizens in the West. Two consecutive parliaments during Merkel's tenure as chancellor have refused to redress that injustice.

"Citizens of the Federal Republic have lost their legal status because of an arbitrary interpretation of pension law," Siegfried Ulrich, who left East Germany for the West in 1989, told DW. "She's well aware of this problem."

Former inmates in East German prisons also complain that they have not been given the full state compensation they say they're entitled to under West German law. Merkel went over to speak with the demonstrators before her prison visit.

"We're cautious, but we do see this as progress because we'll have the chance to follow up," said Carl-Wolfgang Holzapfel - a West Berlin native who spent nine months in Hohenschönhausen for helping people escape East Germany. "We never got this close. We've never been able to tell Mrs. Merkel personally about our cause. That gives us hope that maybe even Mrs. Merkel will reconsider and say, 'We have to do something.'"