The German chancellor has not ruled out EU sanctions to stem the crisis, said a government spokesman. Caracas has accused several European countries of undermining "Venezuelan democracy and its institutions." 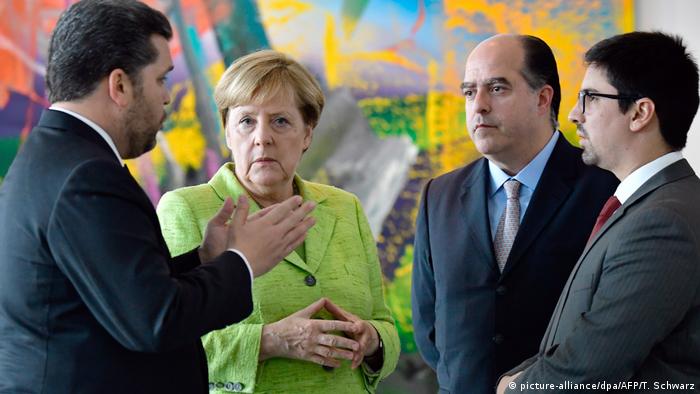 German Chancellor Angela Merkel on Wednesday discussed the future of Venezuela's democracy with several high-profile opposition lawmakers from the country as the South American nation struggles under the weight of a bloody crackdown and economic recession.

Julio Borges, leader of the opposition-held National Assembly, and Freddy Guevara, the body's vice president, have traveled to several European countries to raise awareness of the deteriorating situation in Venezuela.

In August, a pro-government constituent assembly stripped Venezuela's legislative body of all its power after the National Assembly refused to pledge loyalty to it.

Sanctions on the table

German government spokesman Steffen Seibert said the discussions focused on the "worrying human rights situation in Venezuela as well as the dramatic situation regarding the needs of the Venezuelan population."

Merkel "expressed her absolute support for the National Assembly and the Venezuelan people," said Borges in a Spanish-language tweet. "Merkel also expressed her deep concern about the grave humanitarian crisis and constant violation of human rights in Venezuela."

Berlin "didn't rule out EU sanctions" with regards to finding a peaceful solution to the crisis, Seibert added.

"These types of expressions are absurd and offensive to the functioning of Venezuelan democracy and its institutions," said Arreaza.

In August, Venezuela summoned Germany's ambassador to Caracas after Berlin called for an end to "arbitrary arrests and excessive violence against the opposition."

More than 130 people have been killed and hundreds more injured and detained since April, when a Supreme Court ruling that stripped the opposition-held National Assembly of its legislative powers triggered mass anti-government demonstrations.

The international community has accused the government of Venezuelan President Nicolas Maduro of undermining democratic institutions. Maduro has failed to redress chronic shortages of food, medicine and basic goods.