Berlin and Seoul have said a clear message is needed to stop the "threat and provocation" from Pyongyang, after a new ICBM test. President Moon hopes to use the upcoming G20 to discuss the matter with major powers. 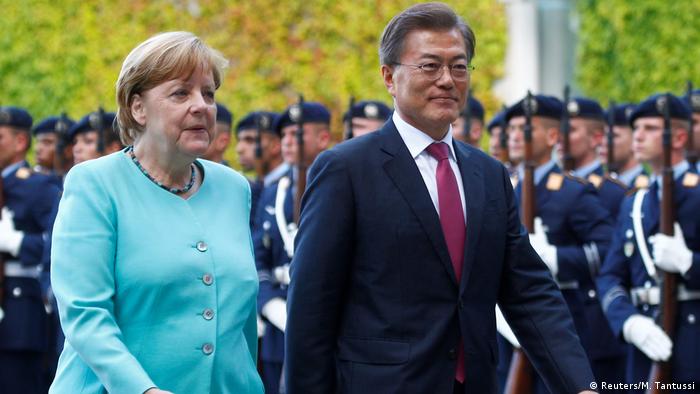 German Chancellor Angela Merkel and South Korean President Moon Jae-in agreed on Wednesday that tougher sanctions were necessary against North Korea after it announced a test-launch of a new intercontinental ballistic missile (ICBM).

"This is a great threat and provocation," said Moon during his joint press conference with the German chancellor. The president was in Berlin ahead of an upcoming G20 summit in Hamburg.

"North Korea should stop immediately...We should work on more sanctions," during the G20, Moon added.

Merkel said that North Korea represented a "great danger" to global peace. She said that Germany stood wholeheartedly against the atomic ambitions of leader Kim Jong-Un.

Before their joint talks, the chancellor had also expressed her hopes about eventual reunification of the peninsula that has been split since the 1950s.

"This is a concern that lies close to our hearts because we know from our own experience what a divided country means, and how happy we were when we were able to restore German unity in 1989," Merkel said.

The comments were a reaction to a North Korean statement issued on Tuesday, declaring that it had made a "historic breakthrough" in its weapons program. Pyongyang claimed that it successfully tested its new ICBM, which was later confirmed by Washington. The US and South Korea responded by participating in joint military exercises to act as a warning to Pyongyang.

What next after North Korea's 'ICBM test' - diplomacy or armed confrontation?

As North Korea remains firm in its pursuit of advanced weapons, a group of six prominent figures in the US has issued a letter to President Trump urging diplomacy to resolve the problem. DW spoke to one of them. (04.07.2017)

Should the world be worried about comments made by North Korean leader Kim Jong Un signaling an apparent change in nuclear doctrine from the secretive dictatorship?

North Korea has fired a suspected intercontinental ballistic missile off its east coast, according to Japan and South Korea. It comes less than a fortnight after the US accused Pyongyang of testing an ICBM system.

North and South Korea exchange goodwill letters ahead of leadership shift in Seoul 22.04.2022