For the first time, "Islamic State" (IS) has claimed responsibility for a deadly attack in Afghanistan. Is the group becoming a force to be reckoned with in the region? DW speaks to analyst Michael Kugelman. 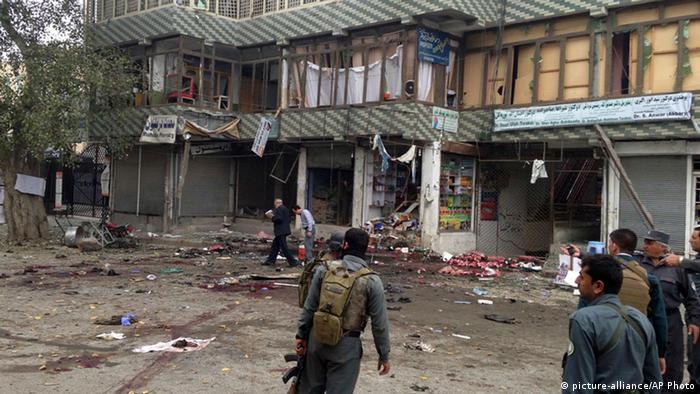 On Saturday, a suicide bomber on an explosives-laden motorbike blew himself up outside a bank in the eastern Afghan city of Jalalabad, killing at least 35 people and wounding around 125, according to the authorities. But contrary to initial suspicions, this attacked was not carried by the Taliban, who denied any responsibility.

Instead, the bombing was attributed by Afghan President Ashraf Ghani to "Islamic State" (IS) or Daish as it is called in the region in what seems to be further evidence that the militant Sunni group has gained a foothold in the conflict-ridden state.

UNAMA chief Nicholas Haysom had already expressed concerns that the group's presence in the country could potentially "offer an alternative flagpole to which otherwise isolated insurgent splinter groups can rally."

Kugelman: 'IS now has a formal presence in the country'

In this context, Michael Kugelman, a South Asia expert at the Woodrow Wilson Center for Scholars, says in a DW interview that while there is strong evidence suggesting that this may have been the group's first deadly attack in Afghanistan, one would be wrong to assume that the group acted alone.

DW: Shahidullah Shahid, who claims to be a spokesman for IS in Afghanistan, said the group was behind the attack in Jalalabad. What is your view on this?

Kugelman: I would say it is quite likely to be true. Last January, IS formally recognized its expansion into the Afghanistan-Pakistan region, and appointed a number of disaffected Taliban leaders as representatives. One of them was Shahid. Given that IS does not seem to be in the business of claiming responsibility for attacks it doesn't carry out, we should take this claim seriously.

If you connect these dots, you can make a strong case that IS has carried out its first major attack in Afghanistan. At the same time, we shouldn't assume equivocally that IS was the sole perpetrator. There are many militant groups in Afghanistan - such as the Haqqani Network or various other factions of the Taliban - who are eager to demonstrate that they are still relevant. In fact, I would argue that the well-coordinated and organized nature of this attack has all the hallmarks of the Haqqani network.

How Afghan women are dissuaded from asserting their rights

Deeply engrained social norms along with allegations of corruption and lack of professionalism are hindering access to justice for Afghan women victims of violence, a new UN report finds. DW examines. (20.04.2015)

The attack in Jalalabad suggests the "Islamic State" has arrived in Afghanistan. Florian Weigand thinks it is a consequence of the international community's withdrawal from the country before its problems were solved. (18.04.2015)

Since the drawdown of US-led troops, Afghanistan has been grappling with a Taliban comeback in some regions. Locals have little confidence in the government. Kiran Nazish reports from Kunar province. (04.04.2015)

Then again, this attack may have been the work of a hybrid group of militants - perhaps some fighters inspired by or members of IS, combined with disaffected fighters from the Haqqani network and Taliban.

Who is Shahidullah Shahid and what does his background mean for the assumed IS presence in Afghanistan?

Shahid was formerly a top spokesman for the Pakistani Taliban. He was fired by that group last October, after he - along with several other senior TTP officials - threw his support behind IS. He is now an IS official- a status made very formal earlier this year, when IS named a series of former Taliban leaders as its representatives in the Afghanistan-Pakistan region.

Since Shahid is one of about a dozen or so militants in the Afghanistan-Pakistan region boasting a formal affiliation with IS, it is pretty clear that IS has a presence in Afghanistan. By no means is this a physical presence akin to what it has in Syria and Iraq, or even in other countries in the Middle East, but still it is a presence nonetheless.

Do you think this attack - if really carried out by IS - will be the first of many more to come?

Unfortunately, I fear that this attack, if perpetrated by IS, will certainly not be the last in Afghanistan. IS now has a formal presence in the country, and it will have a steady pool of potential recruits so long as the Taliban continues to fracture and lose many of its fighters. So long as IS has members in Afghanistan - or at least fighters willing to commit attacks in its name - then IS will be able to carry out attacks in Afghanistan.

Let's also keep in mind that many, if not most militants, in Afghanistan and Pakistan continue to be loyal to the reclusive al Qaeda-allied Mullah Omar, and they won't react warmly to a new neighborhood bully that rejects the legitimacy of the long-time Taliban leader.