Indonesia says the volcano continues to spill lava, hours after the initial eruption. The explosion came two years after a similar eruption caused a tsunami along the Sumatra and Java coasts that killed 430 people. 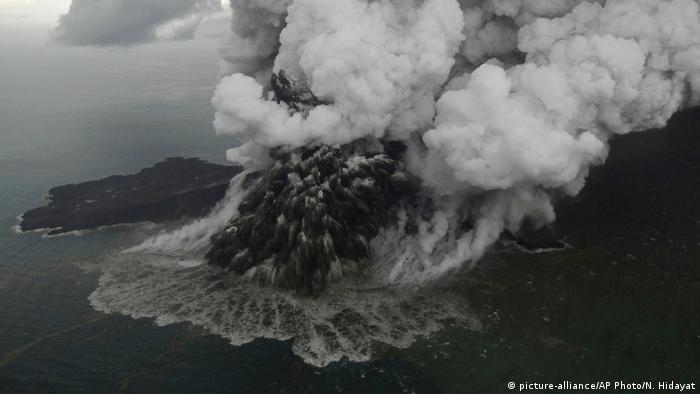 Smoke rises above Anak Krakatau in 2018

Closed-circuit TV showed the lava flares on Friday night, while the agency said several hours later that the eruption was continuing.

No casualties were reported and a level 2 alert status remained in place, the second-highest on a scale of four.

Friday's eruption came two years after a huge flare-up caused a tsunami along the coasts of Sumatra and Java, killing 430 people. Thousands were injured.

The 2018 eruption caused the volcano to lose much of its visible height.

Anak Krakatau, which means Child of Kratakau, is located between the islands of Java and Sumatra and was created after the legendary eruption of Krakatau volcano in August 1883.

The eruption was so violent that the volcanic island that had existed until then sank into the sea. More than 35,000 people lost their lives.

The sea between Sumatra and Java, like the rest of the island nation, sits on the Pacific Ring of Fire, the most geologically active zone on earth where volcanic eruptions and earthquakes are frequent.

The country's most active volcano has spewed ash 5,000 meters into the air, prompting officials to tell residents to "stay calm and not panic." It's the second time this month that Mount Merapi has erupted. (27.03.2020)

Officials have warned another tsunami could hit the stricken area as volcanic activity continues. Many residents who survived the 2004 tsunami are having to deal with flashbacks. (26.12.2018)

Scientists say the Anak Krakatau volcanic island in Indonesia has lost three-quarters of its volume since it erupted a week ago, causing a deadly tsunami. And it is also considerably shorter. (29.12.2018)