The country's most active volcano has spewed ash 5,000 meters into the air, prompting officials to tell residents to "stay calm and not panic." It's the second time this month that Mount Merapi has erupted. 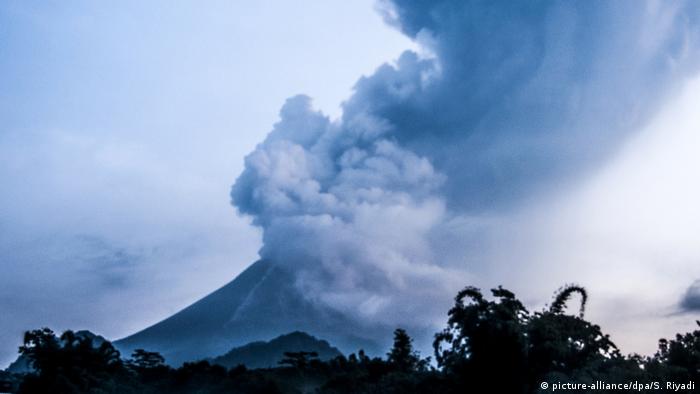 Indonesia's Mount Merapi, located in central Java, erupted on Friday, spewing a massive cloud of ash some 5,000 meters  (16,000 feet) into the air.

The eruption lasted around 7 minutes, the Geological Disaster Research and Development Centre said on its website.

Despite the huge eruption, local residents were advised to remain calm and not to panic. Authorities did not raise Merapi's alert from its current third-highest level.

"Local residents are advised to remain calm and go about their activities as usual, but stay alert for volcanic ash," the agency said.

This is the second time that Merapi, Indonesia's most active volcano, has erupted this month. The earlier eruption was slightly larger and a massive ash and sand cloud from the eruption coated Yogyakarta and neighboring city Solo with grey dust and forced an airport closure.

Indonesia sits on the so-called "ring of fire" where the collision of the Earth's tectonic plates causes frequent quakes and major volcanic activity. Indonesia has nearly 130 active volcanoes alone.

The Pacific Ring of Fire is aptly named. It's a string of volcanoes in the Pacific Ocean, and the region is prone to earthquakes. In fact, most earthquakes strike within the ring. Here's five facts. (13.01.2020)

Indonesia is seeking to curb Chinese influence over its fishing waters in the South China Sea with help from Japan. Yet, at the same time, Tokyo must ensure the plans do not endanger its own rapprochement with Beijing. (26.01.2020)