Mount Merapi's eruption lasted more than seven minutes and was heard in communities more than 30 kilometers away. A massive plume of volcanic ash forced authorities to shut an international airport on the island of Java. 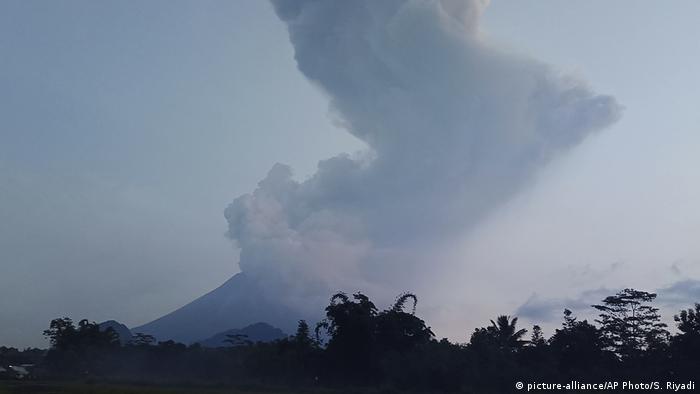 Indonesia's most active volcano, Mount Merapi, erupted early Tuesday, sending a column of smoke and ash as high as 6,000 meters (19,680 feet) into the air.

The country's Geology and Volcanology Research Agency warned people to stay outside a 3-kilometer (1.8-mile) exclusion zone around the crater, citing possible danger from flowing lava and other scalding volcanic material.

The agency said the eruption lasted for nearly eight minutes, with ash and sand raining down on several communities near the cities of Solo and Yogyakarta on the main island of Java. Witnesses reported hearing rumbling some 30 kilometers away. 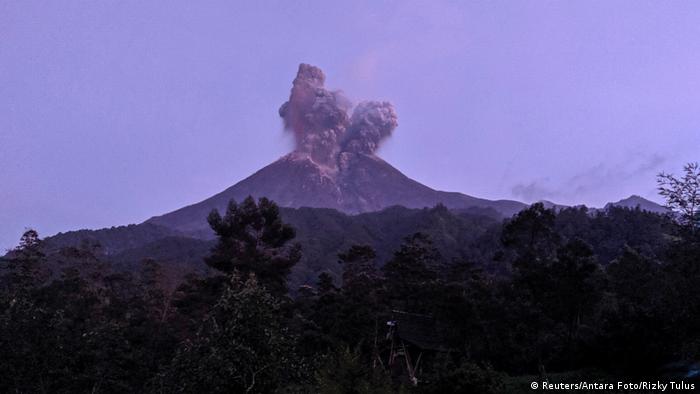 Mount Merapi's last major eruption was a decade ago

The Volcano Observatory Notice for Aviation issued a red alert, prompting authorities to temporarily close the international airport in Solo, some 40 kilometers (25 miles) away. Four flights were canceled, an airport spokesman said.

"We are coordinating with authorities to monitor the impact of the volcanic ash's movement on flights," the spokesman said.

The volcano agency said the alert status at Merapi would remain at the third-highest level due to ongoing activity.

Mount Merapi, a 2,930-meter peak, is a popular tourist attraction and farmers also use the fertile soil on its slopes to grow crops. The volcano's last major eruption in 2010 killed more than 340 people.

Indonesia, an archipelago of more than 17,000 islands and islets, has nearly 130 active volcanoes. The southeast Asian nation is prone to earthquakes and volcanic activity because it sits on the Pacific "Ring of Fire," a vast area where many tectonic plates meet.

The eruption that lasted two minutes sent ash plumes flying as high as six kilometers. Indonesian authorities had last month raised the alert level for the volcano on the island of Java to one notch above normal. (01.06.2018)

Hundreds of hikers were stranded on an active volcano on the Indonesian island of Lombok when a powerful earthquake triggered landslides in the area. Rescue personnel reached the walkers with the use of helicopters. (31.07.2018)

Indonesian authorities ordered an evacutation of the area around Bali's Mount Agung volcano as it erupted Sunday. Other volcanic eruptions have cooled the climate, with one even leading to the "year without a summer." (27.11.2017)