An unexpected twist to Serbia′s election | Europe | News and current affairs from around the continent | DW | 31.03.2017

An unexpected twist to Serbia's election

A very negative Serbian presidential election campaign is coming to a close. It's been overshadowed by a dirty tussle between Prime Minister Aleksandar Vucic and the other candidates. Lidija Tomic reports from Belgrade. 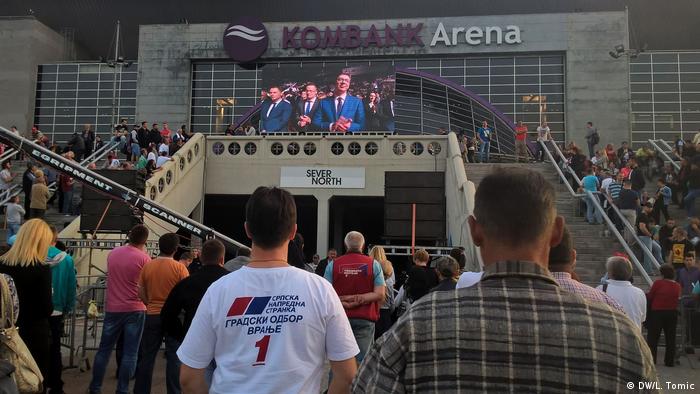 On a sunny morning in Belgrade as people rush to work, activists are hastily setting up mobile stands on the streets. "I have talked to citizens since the beginning of the campaign and am convinced we will win," Jelena, a member of the ruling Serbian Progressive Party (SNS), told DW while arranging flyers and supporter lists on a stand with the slogan "Faster, harder, better."

As the first round of voting approaches this Sunday, the campaign has become increasingly tense, with insults traded, biased media coverage and a clear division between supporters and opponents of the ruling SNS presidential candidate and acting Prime Minister Vucic. Nominally there are 11 candidates, but judging by realities on the ground there's Vucic - and then the "others."

Public polls show that Vucic dominates both in the media and in the field, with massive rallies and guest speakers such as former German Chancellor Gerhard Schröder, a deputy speaker of the Russian Duma, Pyotr Tolstoy, and Hungarian Minister of Foreign Affairs and Trade Peter Siarto.

The opposition candidates' campaigns are far more modest, reduced to walking around and talking to voters. "Presidential elections, called in the shortest legal term possible, were preceded by uncertainty whether there would be just presidential and/or early parliamentary elections. That led to heated messages, which sometimes turned to hate speech," Rasa Nedeljkov, program director of the Center for Research, Transparency and Accountability (CRTA), which monitors the fairness of entire electoral processes, told DW.

Support at a price

In a country where every fifth citizen lives on the edge of poverty, getting a job is the most important means to survive. "I have joined the SNS campaign, because I hope to become a full-time employee in a hospital I work for," says a 35-year-old SNS supporter from Krusevac, who wanted to stay anonymous.

In Krusevac, once a rich industrial town, the chances for employment are low. Therefore, she says that being a member of the ruling party makes a difference. "I have participated in rallies throughout Serbia, while my friends collected signatures. More signatures mean more safe votes and for them better chances to get a job in a new factory. One of my friends was told she wasn't active enough so she won't get a job."

She says that activists are not paid to gather at rallies. "But I do it out of fear of losing my job." 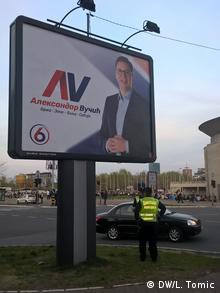 Vucic's campaign has come under attack

There is a pervading sense that many feel intimidated and are afraid to voice their affiliation publicly. "Our observation missions were in the field in January. Traveling throughout the country we have realized that unlike in previous years, people are not ready to talk about their political opinions, at least not publicly. They fear that if they do, it could affect them or people around them. The way the candidates not close to the government are being treated adds to such a climate of fear as well," says Nedeljkov.

Read: Serbian government trolls in the battle for the internet

The campaign has entered people's homes - quite literally. Voters complain that activists, mostly from SNS, are knocking on their doors with lists for signatures containing their names, ID numbers and addresses. Rodoljub Sabic, the commissioner for information of public importance and personal data, has addressed the public regarding such complaints. "Voters are not obliged to let activists in their homes, or to answer their questions," he said.

Nedeljkov says that parties have the right to collect such databases, but warns about the thin line between giving support voluntarily and being pressured to do so. "However, if such data is gathered illegally, or hasn't been reported to the commissioner, then we are talking about breaking the law," he said.

The campaign has been marked by arrests and a crackdown on opposition figures. Three supporters of the independent candidate and former Ombudsman Sasa Jankovic were detained recently for removing posters of the ruling party in Kraljevo.

"Our town is now filled with SNS posters. Because of that, our activists cover their posters with ours, write graffiti over them, or simply tear them apart. The police detained three of them just outside the hall that was being prepared for Vucic's convention. Soon after, police forces were dispatched to protect posters and billboards so Vucic could be welcomed in a 'friendly' atmosphere," Vladimir Marovic, a member of the opposition Local Front, told DW. 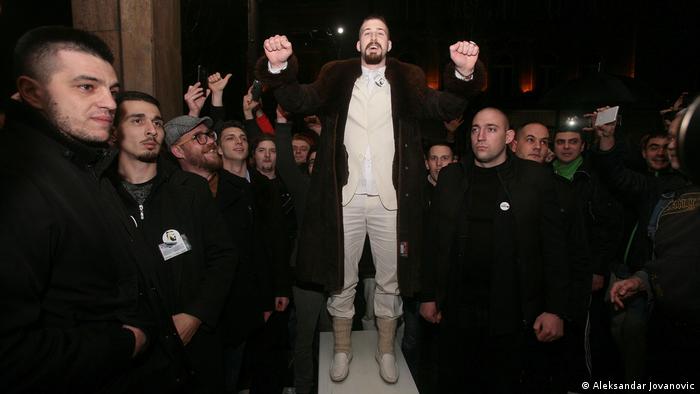 Beli has managed to mobilize young voters who in the past have been too apathetic to vote.

The negative campaign appears to be supported by pro-regime media and tabloids, which accused the celebrated basketball coach Duda Ivkovic of supporting Jankovic for personal gain, while Vuk Jeremic's spouse, another opposition candidate and former foreign minister, has been labeled a drug lord.

The election campaign has notably failed to attract traditional non-voters, who represent about 40 percent of the electorate. Instead, many people, especially the younger generations, who have never been interested in politics, launched a campaign in support of a student using the fictional name of Ljubisa Preletacevic aka Beli, who mocks politicians and delights in pointing out the country's failing political system.

Although he started his campaign on social networks as a joke, Beli has gathered more than 12,000 signatures for his candidacy. "I have never voted before, and now I finally have somebody to vote for. Beli has found the right way to express our revolt against all the negativity around us," said Dragan M., a 25-year-old student from Belgrade, who waited hours in the rain to support Beli's campaign.

And it seems to be paying off: Some polls have Beli in second place, just behind Vucic. "We will hit them hard," says Dragan, referring to Beli's slogan "The poor strike back."