Staff shortages exacerbated by a strike have caused huge delays at Amsterdam's Schiphol airport during the holiday season. The airport has now asked airlines to reduce the number of passengers by cutting flights. 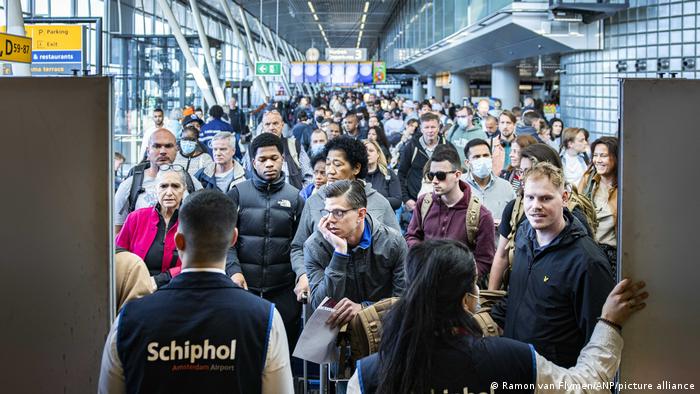 Amsterdam's Schiphol airport has written to airlines asking them to cancel flights as it deals with overcrowding and flight delays, Dutch media reported on Thursday.

The request involved asking airlines to cancel some of their flights for the coming weekend so as to avoid a collapse in the service as was seen the previous weekend.

It also requested the airlines stop making new bookings for the week of May 2 to 8.

The airport, the third-largest in Europe, has been reeling from an unannounced strike by baggage handlers that began on Saturday, as well as staffing cuts made to make up for losses during the pandemic.

"This is an annoying but necessary measure to reduce the number of passengers," the airport said to Reuters in a written statement.

The airport also wrote in a letter to airlines that it had no short-term solution for the long queues, Dutch newspaper De Telegraaf reported.

Dozens of flights had to be canceled over the weekend as the baggage strike began. It also coincided with the beginning of the school holidays.

Thousands of people were left waiting, and others were told not to drive to the airport. It took days for the flights to be processed.

Passengers on Thursday were still left waiting for hours in lines as the airport struggled to deal with an increase in customers but not enough staff for handling baggage or passport control.

Tourism is bouncing back

De Telegraaf reported that several airlines had said they would not cancel any flights and that the companies were furious with Schiphol's management.

The airline KLM, the Dutch branch of Air France-KLM, was expecting to cancel some of its flights on Friday, Dutch news agency ANP reported.

Schiphol could not say how many flights would be affected or how many passengers it would be able to service.

While the airport is searching for a short-term solution by reducing the passenger load, the long-term solution will require the hiring of staff to fill in the empty positions from security to parking staff.