Amnesty International: China Has Made Only Minor Progress

Verena Harpe, a China expert from Amnesty International Deutschland's Asia desk, spoke with DW-WORLD.DE about the current state of human rights in China and the efforts of the international community. 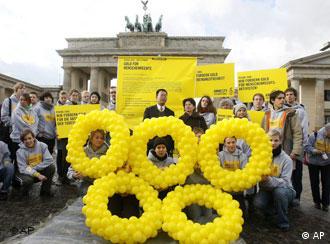 Amnesty International organized a large protest in Berlin in December

DW-WORLD.DE: Ever since the international pressure over human rights started to build, what efforts has China made to improve conditions?

Verena Harpe: Unfortunately there have only been minor improvements. In 2007, China reintroduced the Supreme People's Court death penalty review which means that every death sentence must be heard by the top court. Before that, the local courts would just decide. But as there were many miscarriages of justice, and the fact that so many death sentences -- more than in any other country in the world -- were being handed down, international pressure eventually brought about this change. It is unlikely that this change would have come about if the subject hadn't been addressed by the UN and others, so in this case it looks as though pressure has worked. The Chinese say it has reduced the number of death sentences by 15 percent but no-one knows for sure if this is correct because the figures are covered by state secrecy laws. However, in China, there are still around 70 crimes which carry the death sentence, also many non-violent crimes such as economic and drug-related offences.

This is a first step but more needs to be done. In particular, it still does not guarantee that those facing the death penalty in China receive a fair trial. 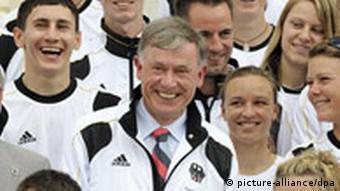 Another improvement, as claimed by the International Olympic Committee (IOC), is the increased freedom of movement for foreign journalists. They can travel around the provinces without having to apply for special permission or arrange interviews through the authorities. Now this sounds good but the reality, what we've heard, is a very different story. First, it is likely that this will only last until after the Paralympics in October and then it will probably change back. Secondly, correspondents have been complaining about harassment, arrests, restrictions of movement and detention without charge for pursuing stories on sensitive issues. While the claim that journalists can travel where they like and talk to who they like sounds good and is celebrated by the IOC, this is not being implemented.

Also, the people that journalists want to talk to are usually the most interesting in terms of the situation in China. These people are being intimidated by the authorities and even detained. For example, a man who had his house and business demolished in 2003 to make way for some Olympic construction was jailed for four years for protesting against forced evictions. He was due to be released in July but the authorities have put his release date back to October – after the games. This is because foreign journalists would want to talk to him. This kind of intimidation and harassment, as well as house arrests and the detention of undesirables have been especially severe in the Olympic neighborhoods.

What new restrictions and measures have the Chinese brought in? 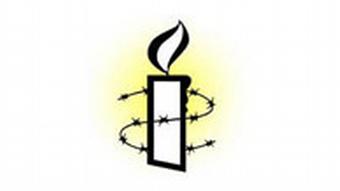 Amnesty International has turned up its criticism of China

In some respects the human rights situation has actually worsened and this is not in spite but because of the Olympics. In the run-up to the Olympics the crackdown on human rights defenders, lawyers and journalists has intensified, the authorities have stepped up repression against critical voices speaking out about the Games and other sensitive issues. There have been more cases of prison sentences being handed out for protesting against the Games, activists have been harassed, kidnapped or put under house arrest. This has been getting worse as the Games approach. There has also been an increase in so-called Administrative Detentions, which are decided without a trial, without facing a court and which can lead to up to four years of “re-education through labor”. This has been used to clean up the beggars, petitioners and illegal taxi drivers in Beijing.

Has Amnesty been encouraged by the response of the international community? Is enough being done?

There has definitely been more discussion since the events in Tibet which really opened up the subject of China's human rights abuses.

Until the Tibet unrest occurred, the IOC had never mentioned anything of arrests of human right defenders or the imprisonment of dissidents. Tibet forced the issue into the open. After that, governments and the IOC couldn't really stay quiet. But IOC president Jacques Rogge only once said something critical with regard to Tibet. Apart from this the IOC has always pointed out that the Games are a “force for good” and claimed that there was progress on human rights because of the Olympics. Not once have they commented on the crackdown on critical voices or other violations with a direct link to the Games. The IOC's approach of silent diplomacy apparently has not yielded significant results. For instance, not long ago, the IOC stated that there was no censorship of the Internet in China when there most clearly was. Even foreign journalists in the Olympic press centers have no access to “sensitive” websites, although the Chinese authorities had promised full media freedom for them. Now the IOC is forced to backtrack, but it said that it was mainly sites unrelated to the Olympics that were shut down and that Olympic-related sites were running – this is unacceptable. It seems that when there is something positive to report, the praise is glowing. But when there is criticism to be voiced, there is very little said. 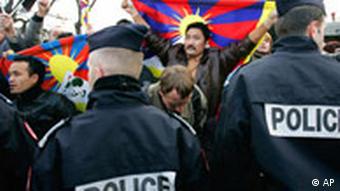 Protests over the situation in Tibet accompanied the Olympic torch parades

International pressure from other governments for human rights reform has also been insufficient. They have taken up the issue with the Chinese behind closed doors in private discussions. Amnesty International is not against this but private discussion is not enough. These talks should be combined with public pressure, something the IOC and international governments are loath to do. They say that public pressure is not the way of dealing with China but the change in approach to the death sentence shows that China does react to public pressure. What we would expect is more open and frank public discussion of the human rights situation, otherwise governments are sending the message that it is acceptable to host the Olympics in an atmosphere characterized by repression and persecution..

As for the boycotting of the opening ceremony by some head of states and governments, Amnesty International has never called for a boycott of the Games or for anyone not to go. We want them to go -- as long as they go and then speak out. They must publicly condemn human rights violations. If they don't speak out, this would effectively be a conspiracy of silence and it would undermine the principles and spirit of the Olympic Charter.

How satisfied is Amnesty International Deutschland with Germany's approach to the human rights issue and the Olympic Games, from the perspective of the government and the DOSB?

Again, the Tibet issue provoked some public condemnation but as with most governments the main discussions went on behind closed doors. The German government claims that improvements can be achieved through the Bilateral Human Rights Dialogue it has set up with China and the Rule of Law Dialogue, but these have yet to really reach any level of sensitivity despite going on for a long time. So far the Rule of Law Dialogue has focused on trade law rather than legislation which would help improve the human rights situation. As for the Human Rights Dialogue, there have been some positive noises but no concrete results or even benchmarks set. While Amnesty is not opposed to dialogue, we believe it has to be complemented by public pressure as it is a key factor that could still help secure change.

As for the DOSB, our main criticism at the moment is the clarification of the IOC guidelines on political protests. The Olympic Charter says in article 51 that "No kind of demonstration or political, religious or racial propaganda is permitted in any Olympic sites, venues or other areas." The DOSB's guidelines for athletes are ambiguous; they just said that decisions on action will be decided in response to individual cases. What they have said that the wearing of wristbands is prohibited. (Amnesty has its own “Gold for Human Rights” band while German athletes have produced their own “Sport for Human Rights” version). We argue that this is not a political statement, human rights are not political. On the contrary, they are in line with the Olympic values enshrined in the Charter.

On the other hand, we appreciate that the DOSB has just asked the IOC to put pressure on the Chinese to lift internet censorship in the Olympics press centers. They say that it is up to the IOC as the DOSB does not have any leverage -- since the DOSB President Thomas Bach is also the vice-president of the IOC, we should see very soon whether they are really serious about this.

Human rights organization Amnesty International called Monday, July 14 for the clarification of rules of conduct for German athletes traveling to the Olympic Games in Beijing. (15.07.2008)