Hillary Clinton's path to the nomination is uncontested no longer. Senator Bernie Sanders is drawing huge crowds and gaining in the polls. But can a democratic socialist win over America? Spencer Kimball reports. 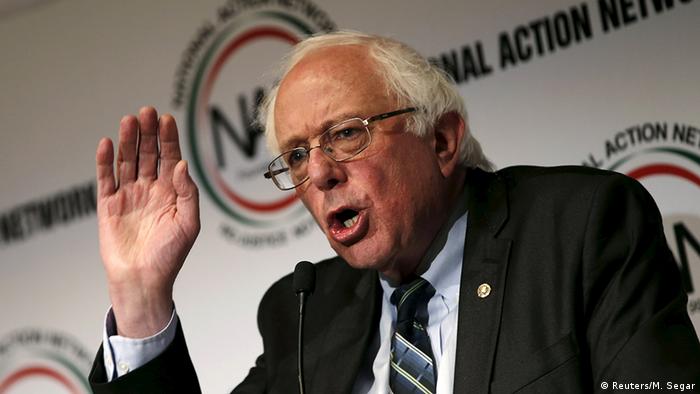 It's a dirty word in American politics. But Bernie Sanders embraces it.

"I wouldn't deny it, not for one second, " Sanders told the Washington Post when he was running for Vermont's senate seat back in 2006. "I'm a democratic socialist."

Sanders is not a conventional American politician. He's the longest serving independent in the history of the US Congress. Though he's long worked with Democrats, Sanders officially joined the party just this year to challenge Hillary Clinton for the presidential nomination.

Initially considered a fringe candidate, he's defying expectations. In May, Sanders trailed Clinton by 45 percent in Iowa, a key early primary state. He's reduced the margin to 19 percent. In New Hampshire, the Vermont senator is behind by only eight points.

Sanders drew a crowd of some 10,000 people in Madison, Wisconsin earlier this month. It was easily one of the largest rallies of the 2016 campaign to date - in either party. And he's no one-hit wonder. On Monday, he drew more than 7,000 people in Portland, Maine.

"No one in the White House will have the power to take on Wall Street alone, corporate America alone, the billionaire classes alone," Sanders told his supporters in Maine.

"The only way that change takes place is when we develop that strong grassroots movement, make that political revolution, stand together, and then we bring about change," he said.

What would the US look like after Sanders' political revolution? Think Scandinavia - Denmark, Norway and Sweden.

"In those countries, by and large, the government works for ordinary people and the middle class rather than, as is the case right now in our country, for the billionaire class," Sanders said.

It's a message that appeals to progressives. But will the broader American public support a self-proclaimed democratic socialist who wants the nation to look more like northern Europe?

"This is a country that had a McCarthy era and a red scare," John Nichols, Washington correspondent for "The Nation" magazine, told DW. "It had red baiting and attacks on socialists, that's part of our media life even in recent years."

Nichols has covered Sanders for years and introduced the Vermont senator at his packed rally in Wisconsin. Though America is very different from Europe structurally and economically, Nichols believes the country is ripe for the populist anti-austerity message that has swept the Old Continent in recent months, and Sanders is trying to tap into that sentiment.

According to Gallup, two out of every three Americans are dissatisfied with the way wealth is distributed in the United States. It's a bi-partisan issue. Three-quarters of Democrats and even 54 percent of Republicans are concerned about income inequality.

"There's space in the 2016 race for messages that really do challenge the economic orthodoxies of the United States," Nichols said.

"They're a little bit more compassionate and empathetic on these issues of economic inequality,"

Reckendorf, an expert on US politics at Virginia Commonwealth University, told DW. "A lot of them either find themselves in that boat or are still young and idealistic enough to think that these changes could work."

Young Americans have racked up $1.2 trillion (1.08 trillion euros) in student debt due to the rising cost of college tuition. Sanders has introduced legislation to make all four-year public colleges tuition free, and would finance it through a tax on Wall Street speculation.

But according to Arthur Sanders (no relation), the broader public just is not there yet. The US politics expert points to Obamacare. Only 43 percent of the public has a favorable view of President Obama's signature domestic accomplishment, according to a Kaiser Health Tracking poll. Senator Sanders, on the other hand, thinks Obama's health care reforms don't go far enough.

"If he's going to argue as he did in the past for single-payer government health care, the public is not ready for that, they're barely ready for Obamacare," Arthur Sanders, a professor at Drake University in Des Moines, Iowa, told DW.

And so far, Senator Sanders also hasn't made inroads with African American and Latino voters, who overwhelmingly support Hillary Clinton. Though he was involved in the civil rights movement in Chicago during the 1960s, he now represents an overwhelmingly white state in New England.

He's also refused to accept corporate money out of principle. While Hillary Clinton has raised $45 million, Senator Sanders has pulled in $15 million from small donors. Regardless of whether or not he can secure the nomination, the democratic socialist senator from Vermont is already having a significant influence on the debate. And perhaps that's his real objective.

Former Secretary of State Hillary Clinton has launched her bid to become the first female US president. Speaking in New York, Clinton unveiled her progressive platform, calling for tax breaks and universal preschool. (13.06.2015)

Hillary Clinton delivered her campaign "kickoff" speech in New York on Saturday. But as DW's Richard Walker found out, it wasn't just supporters who showed up to listen. (14.06.2015)

Jeb Bush: four things you should know about the Republican heavyweight

Jeb Bush's expected announcement that he will make a run for the presidency instantly makes him the most widely known Republican candidate. Despite his prominence there are four key misconceptions about him. (15.06.2015)