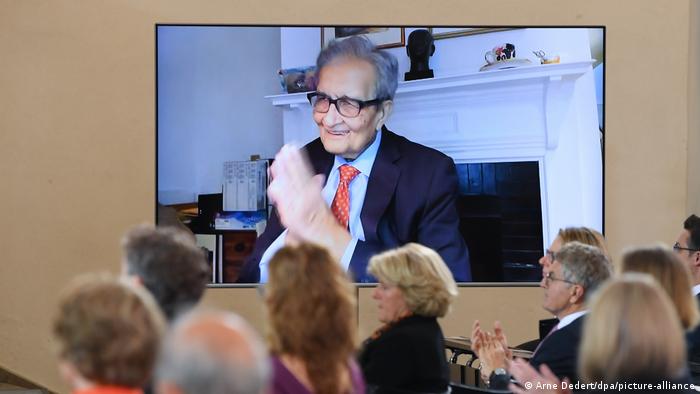 Sen had to deliver his acceptance speech via video-link

German President Frank-Walter Steinmeier was scheduled to speak at the opening ceremony of the Frankfurt Book Fair this year. But Germany’s head of state could not attend the event personally as he had to quarantine after one of his bodyguards was diagnosed with COVID-19.

Actor Burkhard Klaussner filled in for Steinmeier at Frankfurt’s famous Paulskirche church on Sunday during the awards ceremony held for the international peace prize awarded by the organizers of the annual book fair, the German Publishers and Booksellers Association.

Reading the words of the German President's prepared speech, Klaussner noted the unusual circumstances of this year's ceremony: "The halls of our Book Fair are deserted," he said. "And our prizewinner is stuck on another continent. These are truly unusual times."

A 'moral authority' with a desire to create change

This year's winner of the peace prize is the 86-year-old Indian scholar, author and Nobel laureate Amartya Sen. He was connected to the event via livestream from Boston in the US, where he has been teaching and researching at various universities for many years — and where it was 4 a.m. (0800 UTC) when the ceremony took place, a time when Sen might usually be finishing a typical long day's work, he said.

Federal President Steinmeier’s speech stressed that Sen’s works broke the bounds of academia but not only grasping the workings of the world but actively wanting to change the world itself.

"And Amartya Sen has succeeded in changing it," the speech read. "He writes against the inequalities and injustices of this world."

Describing the economic philosopher as a "citizen of the world" and as a "moral authority," Steinmeier said that Sen's lifework embodied ideas pertaining to global justice "like no other." 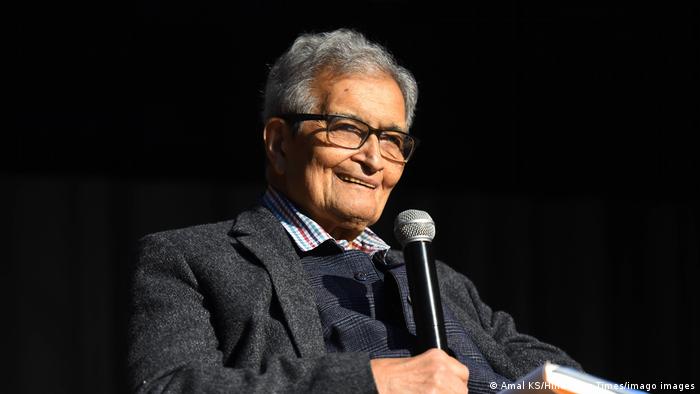 Born into the world of academia

Born on November 3, 1933, in Shantiniketan in West Bengal, in current day India, Amartya Sen grew up living on a university campus, his parent's academic work familiarizing him at an early age with philosophy and politics. After studying economics in Calcutta, he moved to Cambridge to continue his studies, where at Trinity College he decided to study philosophy.

Since the 1960s, Sen has worked at numerous renowned universities, including New Delhi, Stanford, Berkeley, Oxford and Cambridge. Ultimately focusing on the social inequalities underlining poverty, he went on to become one of the most renowned researchers in his field.

In 1998, Sen was awarded the Nobel Prize in Economics for his innovative research on the welfare economics of developing countries. Since 2004, the economist and philosopher has been teaching and researching at Harvard University in Cambridge, Massachusetts.

Sen says that working with his young students is highly fulfilling, adding that he considers them to be his best teachers due to their fresh ideas and political insights into the world of today.

He also highlighted that the global COVID-19 pandemic has forced a rethinking of approaches to global problems, suggesting that people should be guided not by how they might benefit from any given situation — but by how others could benefit.

"We should see our lives in a larger, global context," he said.

The international peace prize of the Frankfurt Book Fair is awarded in recognition of international personalities who have contributed peace in literature, science or art. It has been awarded each year since 1950.

Last year, Brazilian photographer Sebastiao Salgado received the award in recognition for his work on conservation and sustainability.

Amartya Sen: 'I am worried about the future of secularism in India'

This article was translated from the German original by Sertan Sanderson.

The German chancellor has used her weekly podcast to urge the international community to do more to tackle hunger worldwide. Her comments come after the UN's World Food Programme won this year's Nobel Peace Prize.

Leading Indian economist and Nobel laureate Amartya Sen has been awarded Germany’s Meister Eckhart Prize. According to the organisers, Sen was given the prize for his writings on globalisation and identity.