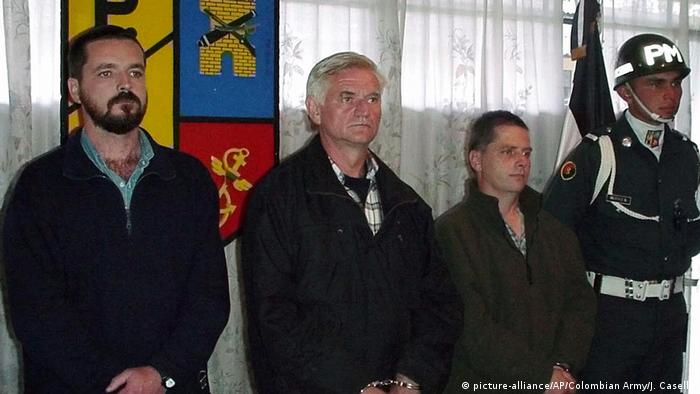 The trio were first captured and arrested back in 2001, at Bogota's airport

A trio of alleged IRA members known as the "Colombia Three" were granted amnesty by a Colombian court on Wednesday, at the tail end of what would have been 17-year sentences for helping FARC rebels build bombs. The three have remained free in Ireland for the duration of their 17-year sentence in Colombia, having fled shortly before they could be imprisoned.

A judge with Colombia's Special Jurisdiction for Peace (JEP) was quoted by Colombian daily El Tiempo as saying "despite the sentences," there was not proof that "the three had been part of a terrorist group. Moreover, it is clear that none of the crimes for which they were convicted at the time had any victims. For this reason…a full amnesty will be issued."

The move is sure to be a controversial one, as many Colombians did not support the 2016 peace and reconciliation deal with FARC, with amnesty for militants a particular sticking point.

The three men in question, Niall Connolly, James Monaghan and Martin McCauley, were arrested in August 2001 at Bogota International Airport for travelling on fake passports as they attempted to return to Northern Ireland. It then emerged that the three had spent five weeks travelling FARC-controlled areas of southern Colombia.

At the time, the arrests threatened to cause significant damage to two ceasefire deals: the 1998 Good Friday Agreement that had broadly brought an end to decades of bloodshed in Northern Ireland, and peace talks between the Colombian government and FARC, a guerilla group that had been waging an insurgency in the country since 1964.

Bogota accused Connolly, Monaghan, and McCauley of training FARC militants to manufacture explosives, saying they had been tipped off by an "international security organization". They were first acquitted, then convicted after an appeal by the prosecution in December 2004 and sentenced to 17 years in prison on terrorism charges.

However, they clandestinely fled to the Republic of Ireland after their sentencing. They were questioned by Irish police but not charged with anything and remained free as Ireland does not have an extradition treaty with Colombia.

The case had major political ramifications on both sides of the Atlantic. In Ireland and Northern Ireland, it significantly damaged the reputation of Sinn Fein, the political arm of the IRA that had been fighting for legitimacy as a serious political party shorn of terrorist trappings. In Colombia, talks between the government and FARC broke down in 2002 and the two sides would not ink a peace deal for another 14 years.

A lawyer for the trio hailed the decision, telling El Tiempo: "At the time, they were accused of everything and the sentences are there to prove it. But definitely, none of them were militants of a terrorist group and the evidence compiled during that time was very weak."

But for the many in Colombia still upset at the terms of the 2016 peace deal, the decision was a slap in the face to the many victims of FARC and their sometimes-partners in crime, the drug cartels.

Senator Carlos Felipe Mejia called the JEP "a court tailored to narcoterrorism, a guarantor of impunity," on Twitter.

Mejia is a member of the hardline Democratic Center party, as is President Ivan Duque, who came to power in 2018 on a platform opposing the FARC ceasefire.

Ireland's republican Sinn Fein party delivered its best-ever performance ever in the general elections. The former IRA-linked party could play an important role in the next government. (11.02.2020)