All your 'Meet the Germans' questions answered live on YouTube

Meet the Germans host Rachel Stewart is inviting fans of the popular series to join her on a YouTube livestream on Friday. Ask her anything about her work and she'll let you in on all the ideas that are in the pipeline. 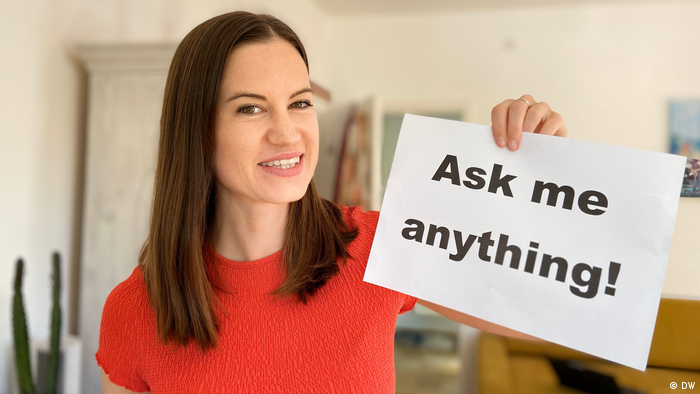 From beer to nudity and ridiculous grammar: Rachel Stewart's Meet the Germans videos exploring the quirks and idiosyncrasies of Germany's culture have been collecting millions of views, leading many people to contribute to the discussion by commenting on the clips through YouTube, facebook or Twitter.

You can post your questions ahead of time on Twitter. And as livestreams go, viewers can also comment during the streaming session and Rachel will try to answer those questions live, too.

Go viral with Meet the Germans

The best bits of the livestream will be posted on social media later on, so get thinking of some good questions! Rachel would also love to hear your ideas for future Meet the Germans episodes. What do you want to know more about?

Some comments to past YouTube posts have become almost just as popular as the videos themselves - whether it's debating aspects of the German culture or pondering the filming techniques used.

For instance, reacting to one of Rachel's recent clips, 7 Things I Had Never Seen Before I Came to Germany, Feralia1987 wrote:

"Everyone: 'wow weird stuff' Me: 'I wonder how often she had to turn the globe and stopped it with her finger till she managed to point on Germany.'"

The comment got 3,000 likes and sparked quite a debate — until Rachel settled the argument: It was indeed pure coincidence.

Rachel moved from the UK to Germany in 2016. As a relative newcomer she casts a fresh eye over German clichés and shares her experiences of settling into German life.

On top of exploring habits that are known to surprise foreigners — from saunas to the peculiarities of German small talk — she regularly comes up with fresh forms to tackle those topics. To pay tribute to Germany's asparagus cult, she came up with a love poem to the vegetable: pure gold.