All eyes on Big Tech as pandemic profits soar | Business | Economy and finance news from a German perspective | DW | 21.05.2021

All eyes on Big Tech as pandemic profits soar

The coronavirus crisis has made the world’s tech giants bigger than ever. They need to live up to that responsibility, speakers at this year's re:publica conference said. 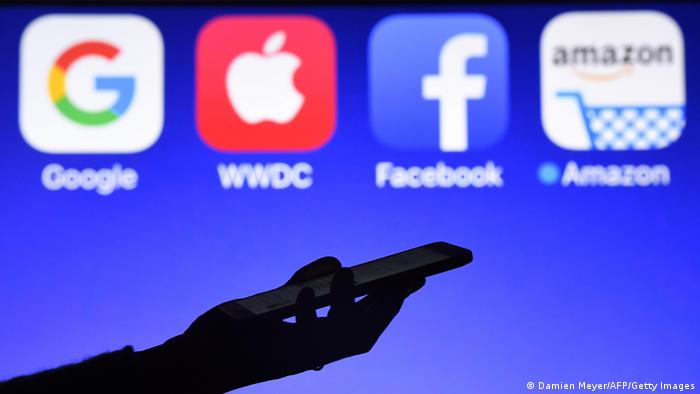 As the world inches closer to getting the coronavirus pandemic under control, it is time to hold the tech industry to account: That was the underlying message of the EU's top digital policy official, speaking at internet conference re:publica.

"There is a sense of urgency to make sure that we use technology for human purposes," European Commission Executive Vice President Margrethe Vestager said Friday afternoon.

Her warnings were echoed by others during the annual gathering of activists, industry officials and policymakers in Berlin, which was held online because of the coronavirus.

"On the one hand, we need to break up monopolies — on the other hand, we are going to need to regulate in some way," author and activist Jillian C. York said.

Big Tech profits grow as others lose out

About a year and a half into the pandemic, contact restrictions have moved much life online, making people increasingly dependent on digital services provided by the world's largest tech companies.

This has, after a brief nosedive during the early days, helped the firms report record profits — while the pandemic plunged much of the rest of the world economy into a dire recession.

And as some countries emerge from lockdowns, recent numbers suggest that the tech industry's success is enduring: During the first three months of this year, the revenue of US giants Amazon, Apple, Facebook, Microsoft and Alphabet, which owns Google, continued to grow by another 41%, climbing to a combined $322 billion (€264 billion).

But critics say that the companies do not treat their competitors fairly and do not pay their fair share of taxes. According to new estimates by the human rights group ActionAid for instance, the five US companies evade paying as much as $32 billion (€26 billion) in tax revenue every year across all G20 countries.

At the same time, critics also say that some of the companies are not doing enough to avoid abuse of their platforms and protect the privacy of their users.

That's why the question of how to deal with Big Tech will be "the central tech policy debate of the coming years," conference co-founder Markus Beckedahl said.

"It's about how to limit the market power of big companies … as well as regulating content."

A three-fold approach to regulating Big Tech in Europe

The criticism voiced during the event comes as governments from Australia to India and the US are drafting laws to reign in Big Tech.

It illustrates how particularly in Europe, a backlash against the companies' growing dominance is on the rise.

The European Union is simultaneously working on three pieces of legislation: a framework to curb the companies' market power; rules to better hold them accountable for content on their platforms; and a separate rulebook dedicated to how they and others can use artificial intelligence technology.

"It has taken us a lot of debate to get here, but it's only starting now, and some of the debates are really tricky," said Vestager, who is also the EU's competition chief, referring to the bloc's upcoming AI rulebook.

It could still be years until any of the proposed rules will become hard laws. How exactly they will look remains unclear.

Previous EU efforts to regulate Big Tech have a mixed track record. The bloc has, for instance, suffered several blows in its attempts to make the companies pay more taxes.

Earlier this month, a top EU court ruled that Brussels had been wrong when it ordered Luxembourg to claw back €250 million in taxes from Amazon. Last summer, judges had already annulled an order for Apple to repay over €13 billion in unpaid taxes plus interest.