A plume of volcanic ash drifting across Europe from Iceland has not just sparked travel chaos. It's also caused major financial losses for airlines and sent their stocks tumbling. 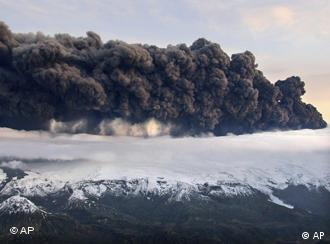 The volanic ash has shut down airports and hit airlines financially

Airlines were reeling Saturday as flights and passengers remained grounded for a third straight day due to the Icelandic volcanic ash cloud hovering over much of Europe.

Large flag carriers and no-frills airlines alike saw their shares dip on Friday. The Eurocontrol air traffic agency in Brussels estimates that nearly 60 per cent of the region's 28,000 daily flights, have been affected by the volcanic ash.

British Airways shares closed down more than 3 per cent on Friday, while in Ireland budget airline Ryanair was down 2.3 per cent. Europe's largest airline by revenue, Lufthansa, ended the day down 4 per cent, while Air France-KLM slid by 3.4 per cent.

The disruption in travel is costing airliners roughly 148 million euros ($200 million) in lost revenues per day. After Friday, about 16,000 flights were cancelled, making it the largest airspace shutdown since the Second World War.

"In addition to lost revenues, airlines will incur added costs for re-routing of aircraft, care for stranded passengers and stranded aircraft at various ports," the aviation industry body IATA said in a statement on Friday.

The Association of European Airlines estimated that the European economy had lost about one billion euros so far from flight bans across the continent.

However, airline reinsurers played down the potential of the ash cloud to greatly disturb business, hurt agriculture, or cause property damage.

"As long as the restriction to air travel remains temporary as is now expected, there should be no measureable impact for the broader economy," said reinsurer Munich Re in a statement. "It's just an issue for the airlines to handle."

Airlines are typically not insured against cancellations.

Deutsche Post, Europe's largest mail and express delivery company, said the cloud has disrupted delivery by air and the company has switched to land transport where possible.

The cloud has even affected the hotel industry throughout Asia, as dozens of cancelled European flights have left hotels struggling to accommodate thousands of passengers.

But according to energy company officials, oil, gas, and electricity production in Europe is not likely to suffer. The one direct effect from the ash cloud is that offshore workers in the North Sea will have to wait longer for replacements, as helicopters were also grounded as part of the flight ban.

Flight bans have been imposed by more than 15 European countries. Britain, Germany, Finland, Slovakia, Estonia and Denmark have extended their bans until Sunday.

Most of Europe's airspace remains shut down

Volcanic ash continued to disrupt air travel across Europe Saturday. UK air traffic control has warned the situation is likely to worsen. German airline Lufthansa said it was canceling all flights until 1800 GMT. (17.04.2010)

A huge ash cloud from an Icelandic volcano has caused air travel chaos across Europe, leaving hundreds of thousands of passengers stranded. Scientists say the eruptions and ensuing disruptions could linger for months. (16.04.2010)