The European aerospace giant saw its revenue decline in the first quarter of 2018 and the company handed over the fewest planes since 2011 as delays at engine providers held up deliveries of its narrow-body A320 planes. 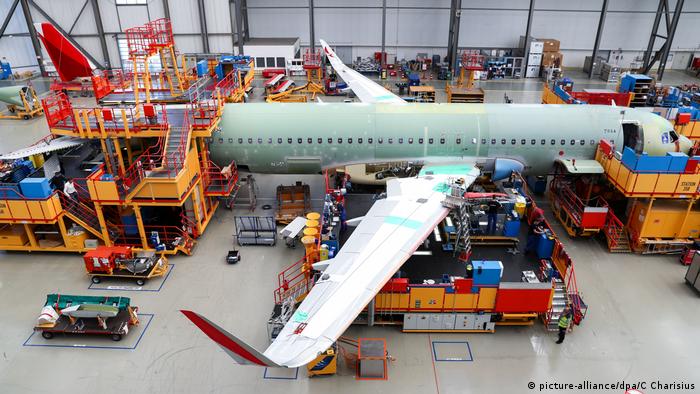 Read more: Uncertain times take Airbus back to the drawing board

In a statement Friday, Chief Executive Tom Enders said the company's performance reflected a shortage of engines for its A320neo plane. The aircraft is a more fuel-efficient version of the company's best-selling airliner, the A320.

Airbus said that dozens of A320neo aircraft were sitting at the company's headquarters in Toulouse, France, and at a plant in Hamburg, Germany, awaiting engines from Pratt & Whitney and CFM International.

"It's a challenging situation for all but based on the confidence expressed by the engine makers and their ability to deliver on commitments, we can confirm our full-year outlook," CEO Enders said.

Overall, the aircraft maker shipped 121 jets in the first three months — the least since the third quarter of 2011 — and well behind a scheduled production of 800 planes for the full year.

With regard to the A320neo, the plane's new engines have suffered from technical glitches as a result of a completely new design boasting aerodynamic modifications that allow airlines to save 15 percent on fuel. The medium-range, single-aisle aircraft has attracted thousands of orders as airlines seek to cut costs to ensure they remain competitive in the future.

The earnings statement did not refer to plans to increase A320neo output further than planned in 2019 — to 63 aircraft a month from a previous target of 60, as disclosed earlier this week.

The head of French engine maker Safran, a partner in CFM alongside General Electric, had expressed caution over the plans on Wednesday, saying it was too early to commit to higher output as suppliers work through what is already a record production ramp-up.

In the quarter, Airbus also faced challenges with the A380 superjumbo, the world's largest civilian airliner. The company said it would slow deliveries of the wide-body aircraft to 50 planes a year from 2019, versus 67 in 2017.

In addition, cost-overruns continued to plague production of the A400M military transport aircraft. The company said it's working to finalize an amended contract for the A400M, after government customers agreed to a revised delivery plan requiring production of just eight aircraft a year from 2020.