Emirates buys Airbus superjumbos in bid to salvage A380 program | Business | Economy and finance news from a German perspective | DW | 18.01.2018

Emirates buys Airbus superjumbos in bid to salvage A380 program

Emirates Airlines has announced a deal with Airbus to buy another 36 A380 superjumbos, just days after the European aerospace giant said it may have to halt production of the double-decker plane without new orders. 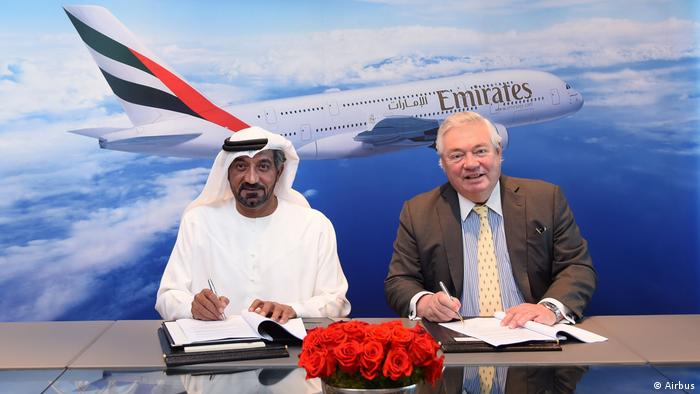 Emirates Airlines said Thursday it had struck a deal with Airbus worth $16 billion (€13 billion), including firm orders for 20 of the double-decker aircraft with options for a further 16 planes. Deliveries were scheduled to start in 2020, the Dubai-based carrier said in a statement.

Emirates is already the world's biggest customer for the Airbus A380, with 101 of these planes already in its fleet and 41 more firm orders previously placed.

"This order will provide stability to the A380 production line," the airline's chairman and CEO, Sheikh Ahmed bin Saeed Al-Maktoum, said in a statement, adding: "Our customers love it, and we've been able to deploy it on different missions across our network, giving us flexibility in terms of range and passenger mix."

Airbus in doubt over A380

Airbus sales chief John Leahy said the new order would underscore the plane maker's commitment to continue producing the A380 "at least for another 10 years."

Still on Monday, the superjumbo program of the European aerospace company had appeared to be in jeopardy after Leahy publicly questioned the future of the A380, saying production risked being shut down if the Emirates deal fell through.

Speaking to reporters, Leahy said that the Middle Eastern airline was "the only one with the ability" to purchase enough aircraft to keep the program afloat.

Airbus produced 15 A380s in 2017; it will hand over 12 this year and just eight in 2019. The company needs a minimum number of six deliveries a year for a period of at least eight to 10 years to keep the A380 alive. That will give the company scope to sell two or three additional superjumbos, helping it to carve out a profit on the program.

The A380 program has been struggling due to a lack of interest by major airlines worried about the cost of operating such a large aircraft. The four-engine plane, introduced in 2005, is so big that some airports had to expand runway facilities in order to accommodate the 550-seat aircraft.

Moreover, purchasing trends have skewed towards smaller, more fuel efficient models like the Boeing 787 or Airbus A350.

More business from Emirates is key to attracting other buyers of the A380 and ensuring jets sold now would hold their resale value. With a list price of $446 million, the plane is one of the most expensive and least flexible for airlines to deploy in their fleets.