Germany's second-biggest carrier, Air Berlin, has slipped further into the red. The reason behind renewed losses is its deep restructuring effort. The airline said it was seeking new partnerships. 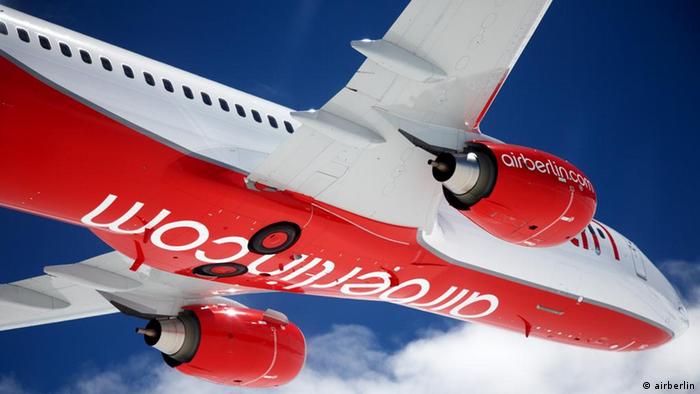 Cash-strapped carrier Air Berlin suffered a net loss of 782 million euros ($852) last year, up from 447 million euros ($487 million) in 2015, the airline announced Friday. Revenues at the group dropped to 379 billion euros ($413 billion), down around 7.1 percent on 2015's figure, after Air Berlin had reduced its fleet by almost half to 75 aircraft and slashed hundreds of routes, now serving fewer than 100 destinations.

"The old Air Berlin was an airline that wanted to do everything; the numbers show very clearly that that doesn't work," the former Lufthansa executive went on. Winkelmann hopes to reorient the firm and bring it back to profitability, and said he was "open to new partnerships and cooperation projects," including new investors, in the context of a reshuffle in the air travel sector.

Air Berlin, Germany's second-largest airline, has been battling headwinds for years. Executives presented a massive restructuring plan in late September that included renting 38 aircraft with crew to Lufthansa and slashing 1,200 jobs - or one in seven of its workforce. The group also spun off its package holiday business, which focuses on serving popular beach destinations.

In future, the unit is to become part of a joint venture with Gulf airline Etihad, an Air Berlin investor holding 29.2 percent of shares, as well as German tour operator Tui and Austria's Niki.

Homing in on high-end travel and long-haul services

Air Berlin itself will focus on high-end travel and long-haul services, promising more routes to the United States beginning in May. The firm's results have left negative territory just once since 2008, leaving it dependent on regular cash infusions from Etihad for survival.

Aside from falling revenues, sales were sapped by intense price pressure from low-cost competitors. The airline's operating result was also deep in the red, with an underlying loss of 667 million euros ($727 million).

Explaining the heavy losses, managers pointed to restructuring costs of 335 million euros, a strike by ground crew at Berlin airports - one of its hubs along with Düsseldorf in western Germany - and the threat of terrorism.

First-quarter results released at the same time showed Air Berlin did not reverse the trend at the start of this year, losing 293 million euros ($319 million) between January and March after a 182-million-euro ($198 million) loss in the same period last year.

Lufthansa agrees to terms of mediation with pilots' union

Lufthansa has said it accepts the recommendations of a mediator in its long-running pay dispute with pilots. The airline has said it plans to staff more future flights with personnel not covered by the terms of the deal. (15.02.2017)