With heavily-populated areas of Mozambique now covered by a massive lake, survivors of Cyclone Idai face disease and hunger. Aid agencies say time is running out for the victims. 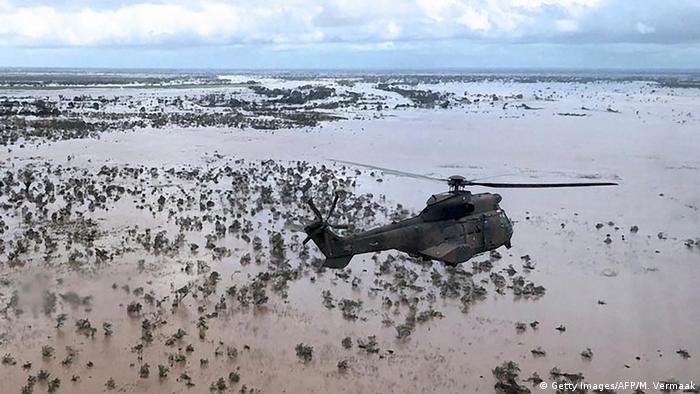 The death toll from Cyclone Idai topped 600 people on Friday, with aid agencies warning much more suffering could be on the way in southeast Africa. Over a week after the powerful storm hit Mozambique and neighboring Zimbabwe and Malawi, survivors now face threat of disease and lack of medical supplies.

"We are running out of time, it is at a critical point here," the United Nations children's agency (UNICEF) chief Henrietta Fore told AFP news agency. She warned hygiene and safe drinking water are absolute priorities.

"There's stagnant water, it's not draining, decomposing bodies, lack of good hygiene and sanitation," Fore said. "We are worried about cholera, about malaria, because of the stagnant water."

According to UNICEF, thousands of people are staying in improvised camps with grossly inadequate living conditions, while hundreds of thousands of children need urgent help.

The death toll will likely increase massively, with thousands believed to have died in Mozambique where flooding has created a 125-kilometer (78-mile) wide lake, devastating an area previously populated by hundreds of thousands of people. The World Food Program (WFP) declared the flood crisis a level three emergency, putting it in the same bracket with Yemen, Syria and South Sudan.

At this stage of the rescue effort, there were almost no survivors being recovered from rooftops and trees, Mozambique's disaster management agency said.

Current relief efforts "are nowhere near the scale and magnitude of the problem," and the situation is likely to worsen, said Secretary-General of the International Federation of Red Cross and Red Crescent Societies Elhadj As Sy.

"The situation is simply horrendous. There is no other way to describe it," As Sy said after touring camps. "Three thousand people who are living in a school that has 15 classrooms and six, only six, toilets. You can imagine how much we are sitting on a water and sanitation ticking bomb."

About 1.7 million people have been affected by the storm and hundreds are still missing, according to the UN emergency aid agency OCHA. The Category 4 storm could be one of the biggest cyclone disasters south of the equator, according to the World Meteorological Organization.

Ports in Africa lose vast sums of money because of corrupt port officials, inefficiencies, and poor infrastructure, among others. Corruption has affected economic growth and slowed the clearance and forwarding of goods.