After the war, Libya battles to curb spread of arms | World| Breaking news and perspectives from around the globe | DW | 07.12.2011

Amid the often messy post-Gadhafi recovery there is one overriding concern in Libya. Hundreds of thousands of guns and military hardware used in the conflict are still unaccounted for and may end up in the wrong hands. 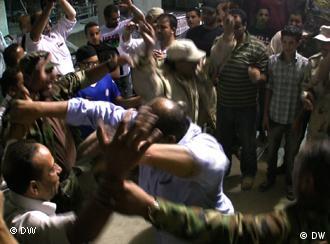 Martyr's Square still regularly sees celebrations of the toppling of Moammar Gadhafi. Fireworks explode overhead, rebel soldiers take children on their anti-aircraft guns and spin them like an amusement ride, and stalls line the square selling revolution trinkets and comic photo-shopped images of the fallen dictator.

"Thank God, Moammar is dead and there is no more trace of his awful family in this country," yelled out one middle-aged Libyan man in the thick of the crowd on a recent evening.

That's the kind of celebratory chatter you hear all over the square, and beyond. But among even this crowd, there is still a worrying sign for the future - guns.

Hundreds of thousands were given to the population to fight the country's recent civil war. With tribal conflicts and personal score-settling on the rise, these same guns are quickly becoming public enemy number one in post-Gadhafi Libya. 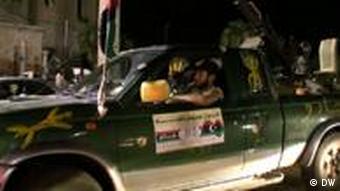 Tripoli brigades are constantly tracking down civilians with guns

Across town, Brigade Captain Abed al-Majid heads up one of numerous Tripoli brigades tasked with getting guns out of civilian hands. Some people, he says, are willing to give up their bullets and hang onto their guns as mere mementos. But it is the other kind he and his men are worried about.

"There are those with guns and they keep the bullets and will use them," he says. "But if they do, we will be on to them. We will arrest these people and they will be punished in court."

On a recent night, al-Majid and his men set up a checkpoint on a busy Tripoli thoroughfare to sweep traffic for illegal guns. Those with government-issued licenses are let go, but those without face a different fate.

"We have to confiscate those guns and interrogate their owners a little to see where they got them, what they will do with them and why they haven't given them up," says al-Majid.

There are two main reasons people are not giving up their arms. Some say that Libya is just not secure enough yet for them to disarm themselves. Others, mostly former fighters, like Ahmed Suleiman and his friends, are refusing to give up their gun for ideological reasons.

They show me their personal arsenal in their home neighborhood of Gorgi on a recent evening. As they clean their guns, mostly AK-47s and handguns, Suleiman explains that they sacrificed so much to defeat Gadhafii and so relinquishing these arms before the new political order is well in place is simply impossible. 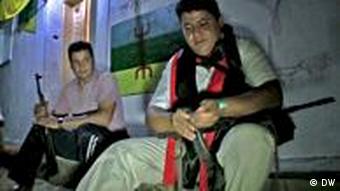 Many former fighters won't give up their guns for ideological reasons

"I won't give them up until the Ministry of Defense releases an official declaration that everyone must give up their guns," says Suleiman. "But right now, we won't do it."

Libya has recently named a new cabinet but no such declaration has yet been issued. What's more, the problem goes beyond rifles and handguns. There are numerous warehouses across Tripoli, run by the National Transitional Council (NTC), where the larger scale of the problem is apparent. They house confiscated heavy artillery - rocket propelled grenades, landmines and even Scud missiles.

Thousands of these kinds of heavy weaponry are thought to be still at large, and it is this that has the international community on edge. It fears Libya's stray military hardware has been smuggled to al Qaeda in neighboring Algeria or to Hamas in the Gaza Strip, via Egypt.

Israel has taken measures to secure its air traffic from possible attack from surface-to-air missiles smuggled to Gaza from Libya, according to Reuters. And the United Nations has sent teams to help Libya find and neutralize various chemical weaponry left behind by Gadhafi.

While the NTC, together with international partners, works to curb the spread of heavy weaponry, its Tripoli-based sub-division, the Tripoli Revolutionary Council (TRC) is focused on curbing the internal problem of armed citizens. 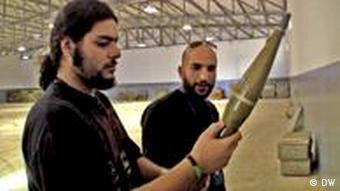 "Our staff is going around neighborhoods, talking about this, educating people regarding guns and the dangers of having guns at home," says Jamal Faraj, who works for the gun control unit of the TRC. "So it's working. It's working."

Indeed, Faraj and his team collected over 1,000 arms in just a two-week period recently. But that is merely a drop in the ocean at this point. There are hundreds of thousand of arms to go. But the real challenge is to restore a sense of security and a political robustness that will encourage citizens to disarm voluntarily.

Meanwhile, back at al-Majid's barracks, there is a party, celebrating a bust, that day, of an arms cache belonging to Gadhafi loyalists. Men gather around plastic tables and enjoy couscous and chicken, and others dance with job to the booming sound system.

While al-Majid says he understands the fears driving those to keep guns, he is determined to overcome the gun problem, one bust at a time.

"Gadhafi is dead and the old era of Gadhafi is over and it's a new future we have now in Libya," says al-Majid. "It's a new era and what's more, we've created it with our own hands."

The reasons and the consequences behind NATO's bombing on the Libyan town of Majer still remain unclear three months on. Deutsche Welle visited the scene of one of the darkest episodes in Libya's war. (22.11.2011)