French Prime Minister Manuel Valls is seeking to form a new government amid a row over economic policy. Valls had earlier resigned, paving the way for forming a new cabinet - possibly with a new economy minister. 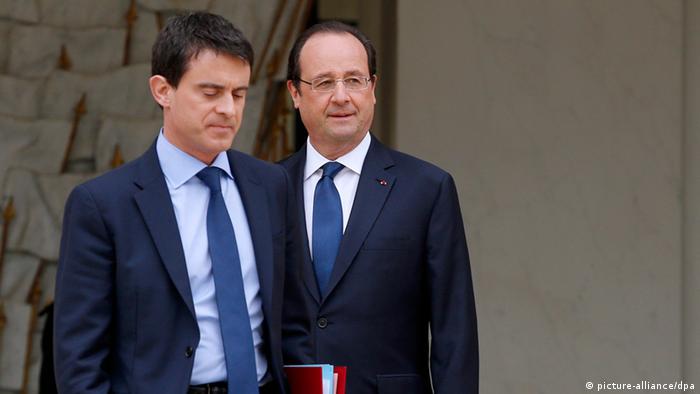 Prime Minister Valls was reported to be busy meeting with members of the cabinet that stepped down on Monday, presumably to discuss possible new portfolios for some - and possibly to inform some that they would not be part of his new government.

Among those widely tipped not to return is outgoing Economy Minister Arnaud Montebourg, who has been at loggerheads with Valls over the government's economic policy.

In an interview published in the Saturday edition of the French newspaper Le Monde, Montebourg criticized austerity efforts in Europe's biggest economy.

"You have to raise your voice. Germany is trapped in an austerity policy that it imposes across Europe," Montebourg said.

In a speech on Sunday, Montebourg called for a "major shift" in French economic policy, just days after President Hollande had pledged to stay the course.

"Given the seriousness of the economic situation, the economy minister has to offer alternative solutions," Montebourg said.

France is struggling with around 10 percent unemployment, and economic growth has been virtually non-existent for the past six months, with the government having revised its growth forecast downwards to 0.5 percent for this year.

Hollande's plan to spur growth is a program that offers private businesses 40 billion euros ($55 billion) in tax breaks in return for a pledge from industry to create half a million jobs over a period of three years.

What has angered the left wing of the president's Socialists is that Hollande plans to finance the program through 50 billion euros in spending cuts.

Sticking with the program

A statement released by the Elysee Palace on Monday, in which it announced that Hollande had asked Valls to form a new government, indicated that the president was determined to stick with his economic program.

"The head of state asked him (Valls) to form a team consistent with the direction he has himself set for the country," the statement said.

The new cabinet is expected to be announced on Tuesday.

Also on Monday, President Hollande kicked off a day of commemorations to mark the 70th anniversary of the liberation of France from the Nazis.

Speaking in a ceremony on Ile de Sein in Brittany of northwestern France, Hollande praised the bravery of the tiny island's population.

"The message from Ile de Sein is that there is no danger, no difficulty we cannot overcome as long as the will is there, as long as people gather together," said the president, who made no mention of his government's resignation earlier in the day.

Hopes for economic recovery in the eurozone were dashed as France's economy stalled and Germany's shrunk in the second quarter. Analysts believe a rebound is unlikely amid Russian sanctions. (14.08.2014)