Hopes for economic recovery in the eurozone were dashed as France's economy stalled and Germany's shrunk in the second quarter. Analysts believe a rebound is unlikely amid Russian sanctions. 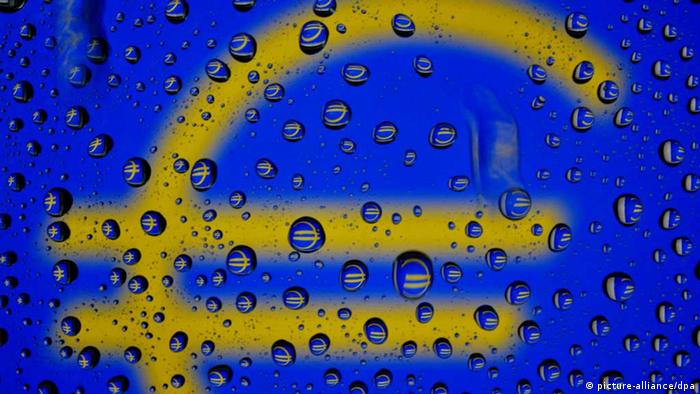 Economic recovery in the eurozone was mainly dragged down by disappointing quarterly performances by the bloc's two biggest economies - stagnation in France and contracting economic activity in Germany.

Furthermore, the eurozone's third-largest economy, Italy, also slid back into recession for the third time since 2008 this quarter, shrinking by 0.2 percent and increasing pressure on Prime Minister Matteo Renzi to complete promised structural reforms.

With uncertainty surrounding sanctions against Russia, analysts believe a quick rebound is unlikely, as Moscow's retaliation in banning most Western food imports will likely be a further deterrent for growth.

French growth at a standstill

France's economy again failed to deliver any growth for the second quarter in a row, causing the eurozone's second-biggest economy to abandon its growth forecasts for both 2014 and 2015.

French officials said the country would miss its public deficit target this year.

In comments to the French media, Finance Minister Michel Sapin did not specifically mention the key 2015 target - when France's public deficit is expected to hit the EU's ceiling of 3 percent of GDP. But he hinted that the goal was not feasible, saying France would cut its deficit “at an appropriate pace.”

“The truth is that, as a direct consequence of sluggish growth and insufficient inflation, France will not meet its public deficit target this year despite a complete control of spending,” Sapin wrote in the French daily Le Monde.

Meanwhile, Germany's economy contracted slightly by 0.2 percent in the second quarter due to weak exports and falling investment, undermining analysts' forecasts that it would stagnate, according to a flash estimate by the German Federal Statistical Office, Destatis.

Europe's No. 1 economy was saved from further contraction by increases in both private household and public sector spending, Destatis added.

Noting this data from Germany, France's Sapin stressed that his country was not alone in the eurozone with a weaker-than-expected quarterly performance. He called for a joint European response that would include major investment projects in infrastructure.

Sapin also urged the European Central Bank (ECB) to bolster its efforts in combating deflationary risks and in making the euro more competitive.

Europe needs a monetary policy “adapted to the exceptional situation of weak growth and weak inflation across the eurozone,” Sapin said.

The French government has said it planned to cut spending by 50 billion euros between 2015 and 2017.

France has already asked eurozone heavyweight Germany to do more to boost growth in Europe. On top of that, it has numerously called for the ECB to devalue the euro, although those pleas have largely gone unanswered.

News was not all dismal, however, as other eurozone economies were slightly more resilient.

The Netherlands reversed a first quarter contraction and expanded by 0.5 percent. Austria was up 0.2 percent on the quarter and Finland reported 0.1-percent growth, seemingly ending its recession.

European stocks responded to the growth scares Thursday by opening down. Shares on the pan-European FTSEurofirst 300 index fell by 0.3 percent and Germany's DAX and France's CAC were down 0.4 percent each.