Some of Africa's largest and oldest baobab trees appear to be dying off at an alarming rate, according to a new study. Aged between 1,100 and 2,500 years, researchers suspect climate change as a cause. 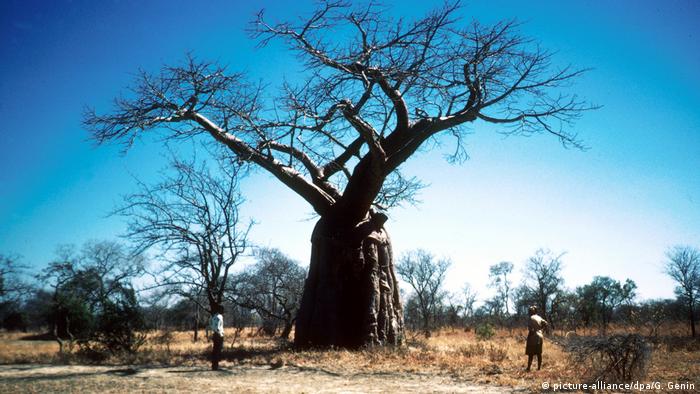 Some of Africa's prized baobab trees appear to be abruptly dying, researchers warned on Monday.

Teams of environmental researchers from Romania, South Africa and the United States reported that nine of the 13 oldest baobabs they were studying had either died altogether, or that at least some of their oldest parts and stems had collapsed and died.

Among the nine affected trees were four of Africa's largest baobabs. All the dead trees were located in the south of the continent — Zimbabwe, Namibia, South Africa, Botswana, and Zambia.

According to a paper published in the Nature Plants journal, the researchers had investigated and dated "practically all known very large and potentially old" baobabs between 2005 and 2017, only to then unexpectedly note that almost all of the very oldest and largest trees had died during that period.

The study's co-author, Adrian Patrut of Romania's Babes-Bolyai University, described the findings as "an event of an unprecedented magnitude."

He continued: "It is definitely shocking and dramatic to experience during our lifetime the demise of so many trees with millennial ages."

By far oldest tree researchers probed, the 2,500-year-old Panke tree in Zimbabwe, saw all its stems collapse between 2010 and 2011. Meanwhile, arguably the most famous baobab, the 1,400-year-old Chapman in Botswana, which bears the carved initials of explorer David Livingstone, saw all its six stems topple at once in January 2016.

While the reasons behind the trees' sudden and apparently concurrent difficulties remains unclear, the researchers said they suspect the demise "may be associated at least in part with significant modifications of climate conditions that affect southern Africa in particular."

What was clear is that the deaths were not caused by an epidemic, the researchers wrote, with Patrut stressing that "there were no signs of disease."

The baobab is one of the world's largest and longest-living trees and is found naturally in Africa's savanna region.

Known for its visually-striking shape, the baobab resembles an upside-down plant, with its branches looking like tangled roots reaching towards the sky.

According to the Kruger National Park in South Africa, the baobabs can live to be 3,000 years old and can grow to be so large that up to 40 people can shelter inside its hollow trunk. "Various baobabs have been used as a shop, a prison, a house, a storage barn, and a bus shelter," according to the park.

The massive trees also serve as an important store of water, while the fruit it bears feeds animals and humans.

Its leaves, meanwhile, can be boiled and eaten as an accompaniment similar to spinach, or used to make traditional medicines.

The bark, when pounded, can be woven into rope, baskets, cloth and hats.

After quinoa, coconut water and kale, the new superfood craze is baobab, packed with vitamin C, calcium and antioxidants. But as the West falls for Africa's "tree of life," is it being overexploited? (16.06.2017)

Passionate about both environmentalism and music, Desmond Majekodunmi has brought the two together to unite Nigeria behind a movement he hopes will see his fellow countrymen and women slip on their planting gloves. (21.07.2016)