Afghan forces have detained the person behind a terror attack on Kabul University, officials have said. The suspect allegedly studied at the university before being recruited by the Taliban-affiliated Haqqani network. 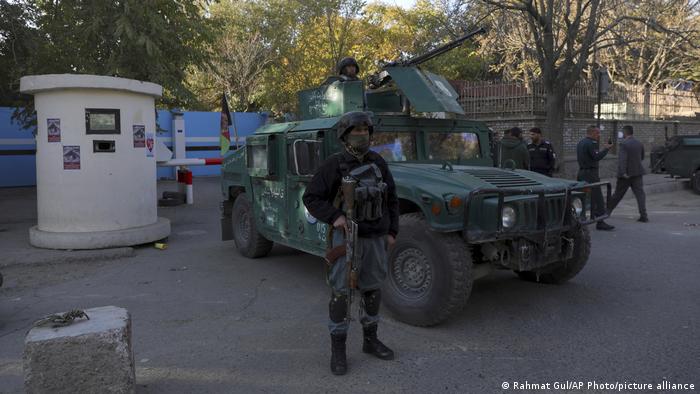 Afghan forces have the "mastermind" behind a brutal attack at Kabul University earlier this month, Afghanistan's intelligence agency said on Saturday.

Three gunman stormed the university's campus in broad daylight on November 2, spraying bullets into classrooms.  At least 22 people were killed and 27 more injured before Afghan forces fatally shot the attackers.

The assault came just days after 24 people were killed in a suicide bomber attack at the Kawsar-e Danish Education Center in the Afghan capital.

The so-called "Islamic State" claimed responsibility for both attacks, though top Afghan officials blamed the university attack on the Taliban.

The country's  National Directorate of Security (NDS) said that special forces arrested the "main mastermind" behind both attacks, identified Mohammad Adel, in a targeted operation in Kabul.

NDS said the suspect admitted during his interrogation that he proposed the idea to attack the university, saying it "would get wide coverage and put pressure on the government."

Afghani Vice President Amrullah Saleh announced earlier in the day that Adel was behind the university attack.

What we know about the 'mastermind' of the university attack

The vice president said Adel was a resident of the Panjshir province in northeastern Afghanistan. He had completed his third year at Kabul University studying the Islamic sharia law.

According to Saleh, Adel was recruited by the Haqqani network, an Afghan guerrilla insurgent group affiliated with the Taliban. Adel revealed during his questioning that the Haqqani network had supplied him with weapons to carry out the university attack, the vice president said.

"The attack was carried out to pressure, defame and make the government look weak in front of the people," Saleh said.

The Haqqani network has long been accused of carrying out brutal assaults on Western forces and civilians in Afghanistan. The United States considers it a terrorist group.

Violence has surged in Afghanistan in recent months despite the government holding peace talks with the Taliban in Qatar in September.

Afghanistan: How Fatima Gailani wants to make peace with the Taliban

Fatima Gailani, one of only four women at crucial peace talks in Qatar's capital Doha, is preparing the way for a new Afghanistan. For her, it's a dream come true. For her country, it's a painstaking endurance test.

Afghanistan: One year on from fall of Kabul, little hope for female athletes 11.08.2022

A year ago, the Taliban regained control of Afghanistan amid chaotic scenes. Female athletes who remain in the country now fear for their lives, while those who left have little hope of resuming their careers.