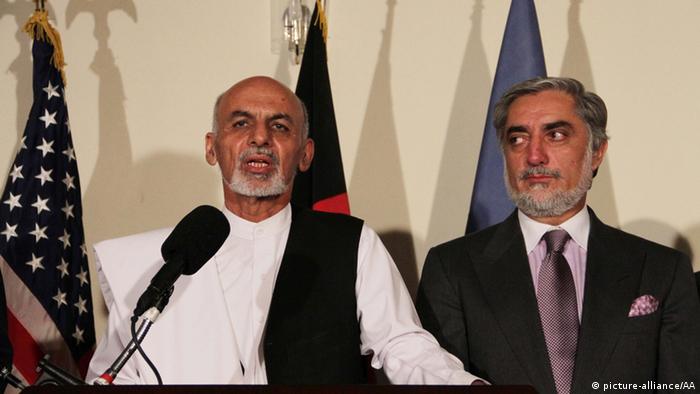 Afghanistan's new leaders signed a pact on Sunday that will see the formation of a unity government. The agreement gives the role of president to Ashraf Ghani, the country's former finance minister, while Abdullah Abdullah, the former foreign minister, will act as "chief executive officer," a position liked to that of a prime minister.

Minutes before the signing, outgoing President Hamid Karzai pledged his support for the new government.

"I'm very happy and please that two of our brothers [Ashraf Ghani and Abdullah Abdullah] have come to an Afghani agreement for the sake of prosperity of this country and for the development of this country," Karzai said.

The "Afghan nation has been waiting for this day," he added.

The two new leaders had been vying for the presidency during this year's elections. In June, Ashraf Ghani won the run-off eletion, according to the election commission. However, Abdullah Abdullah contested the results, accusing his rival of voter fraud.

US Secretary of State John Kerry brokered a deal in July under which both candidates agreed to abide by a UN -monitored audit of all 8 million ballots to avert a descent into violence. The negotiations also paved the way for the power-sharing agreement without knowledge of who actually won in June.

The Independent Election Commission was expected to release the final official results of the June run-off on Sunday evening.

Ghani is expected to be sworn in within days, replacing Karzai, who has led the West Asian country since the US invasion in 2001. Roughly 13 years later, Afghanistan must now transition yet again as the NATO-led mission withdraws its troops.

In anticipation of the challenges facing the new Afghan leaders, Karzai promised to aid them in their new roles.

"[I and the current government] will always be willing to help and advise them to the best of our abilities," he said.