Afghan woman brings education to orphans | World| Breaking news and perspectives from around the globe | DW | 01.10.2013

Andeisha Farid grew up in refugee camps after her family fled Afghanistan in 1983. She returned to her home country because she felt compelled to share the opportunity she'd received: getting an education.

On the day Andeisha Farid was born, a Soviet air strike smashed her family's home to rubble. It was 1983, and the attack forced most of the community in that Afghan village to flee the country. Farid's family took refuge in Iran, and she spent much of her childhood in refugee camps where there was no school, no medical facilities, and not even drinking water.

It's a different kind of environment to the one she's striving to create for children growing up in Afghanistan today. From the colorful girls' unit of her orphanage in Kabul, she talks boldly about the extraordinary personal journey that shaped her view of the world, and eventually led her back to Afghanistan.

"When I grew up in that refugee camp I saw many children [who] lost their lives due to very preventable diseases like diarrhea, fever or other such sickness," she told DW. "People used to walk miles to fetch water.

"Of course living in such circumstances with no facilities, with no access to the very basic life facilities or human rights like school or medical facilities was very difficult," she remembered. "But in the meantime it has made a huge difference in my life as well."

Making up for lost opportunities

Fortunately, when she was six years old, Farid's parents sent her to Pakistan to get an education. She stayed at a hostel and attended classes at a school inside a refugee camp. It was during her studies there that she made the decision to try and help others who hadn't been given the same opportunity.

"I'm sure that I was one of the luckiest children among all the thousands of children living in a terrible situation," she said. "I was fortunate enough to receive an education. The moment I realized how fortunate I was, I thought I should give to my nation what it desperately needs."

Farid stayed true to her word, and in 2007, at the age of 24, she returned to Kabul and founded the Afghan Child Education and Care Organization (AFCECO). Her mission was to provide a portion of the country's estimated 1.6 million orphans with an opportunity to receive quality schooling.

AFCECO orphanages have in-house clinics to provide health care and offer special courses such as English, art and computer studies. Most of the children living at the Kabul orphanage already attend Afghan public schools, explained Farid. 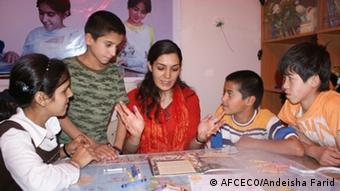 Mahboba, a part-time tutor at the orphanage, explained why AFCECO differs from other schools in Afghanistan.

"I don't see any other organization like AFCECO that gives these kinds of chances to their children. We have art classes, music classes, different program," explained Mahboba. "They can be whatever they want. Everything is ready for them. They don't lack anything."

Today AFCECO serves almost 600 children, and the organization has opened 11 orphanages - nine in Afghanistan and two in Pakistan.

Farid's work has won her admirers all over the world, including US President Barack Obama, who mentioned her in a speech on social entrepreneurship in 2010. She has also been presented with a Global Women Leaders Mentoring Award through Goldman Sachs and Fortune Magazine as well as a Vital Voices Global Leadership Award.

"Being recognized by different organizations or different agencies from different parts of the world really has an impact on me," said Farid. "[It's] also a recognition for these children who suffer most, who are the ones who need and deserve to be recognized.

"Of course it makes us happy and proud."

Keeping the orphanages running hasn't been easy. Farid says her organization has faced many challenges, particularly in providing education for girls. 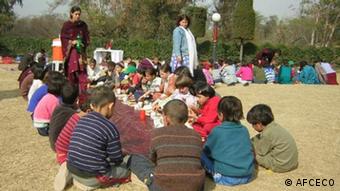 Schools that offer education to girls are regularly targeted by insurgents who oppose women's education. According to the United Nations, girls make up most of the 38 percent (or 4.2 million) school-age children that don't have access to education in Afghanistan.

However, Farid says she remains determined to enrich the lives of orphans and give them the tools they need to build a better country.

"I would like to see engineers to build Afghanistan's future, doctors to take care of the Afghans, teachers which Afghan people desperately need, midwives because Afghanistan still has the highest mortality in the world," said Farid.

Superhero in a burka

A burka-wearing superhero? The first episode of Haroon Rashid's animated 'Burka Avenger' has been shown in Pakistan. The creator of the series says he wanted to create a role model for girls in his country. (30.07.2013)

More than half of Afghanistan's population is under the age of 15. Many of the war-torn country's children are forced to work to support their families. Without proper education, they are trapped in a vicious circle. (12.06.2013)

More on the Generation Change blog