State lawmakers have agreed to lift the parliamentary immunity of regional leader of the far-right AfD, Björn Höcke. The politician is accused of using photos of a victim of a murder for his own political ends. 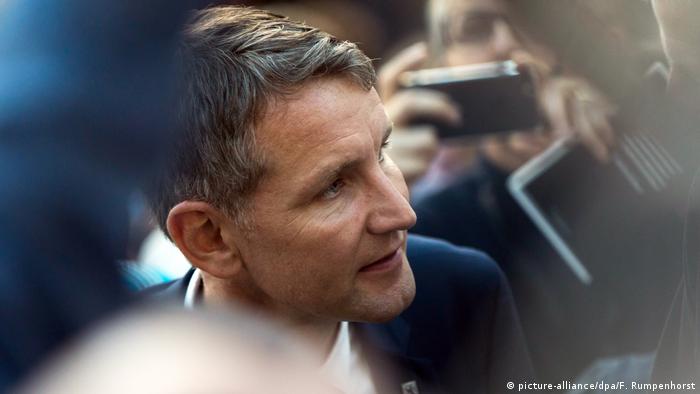 The Justice Committee of Thuringia's state parliament on Friday said it was prepared to lift Björn Höcke's parliamentary immunity after a complaint about the unauthorized use of an image on his Facebook page.

The decision paves the way for prosecutors to investigate Höcke, who is accused of exploiting a picture of 28-year-old Sophia Lösche, who was killed in June, for his own political purposes. Chemnitz prosecutors said they had filed a request with parliament for a preliminary investigation.

Lösche's parents filed a complaint against Höcke at the end of September over photos that he published of their daughter on his Facebook page without their agreement.

Under German law, an individual's consent is required if their pictures are published or exhibited. If the person has died, their next of kin must give permission.

Lösche's image was among several used by anti-immigrant protesters at a "funeral march" in the city of Chemnitz. The march was called after the killing of 35-year-old Daniel H., for which a Syrian man is currently in custody and an Iraqi suspect is still at large. Another Iraqi man who had been taken into custody after the killing has since been released without charge.

The victims' photographs were blown up into large format and paraded along the street. Photos of the demonstration appeared on Höcke's Facebook page.

In their complaint, Lösche's parents claim that Höcke — seen as one of the AfD's more extreme members — exploited their daughter's image for his own political purposes.

Höcke called the allegations completely unfounded. "I posted photos on my Facebook of the demonstration that I attended. That is to say, I documented a public event on my Facebook page. There's nothing more to add."

Lösche, who was a member of the youth wing of Germany's center-left Social Democratic Party (SPD) and a volunteer who worked with refugees, went missing in June while cycling and hitchhiking from the eastern city of Leipzig to her home in northern Bavaria.

A Moroccan truck driver was arrested in Spain, south of Madrid, in connection with the killing after police followed GPS tracking of the vehicle. The remains of Lösche — who had sent a picture of the vehicle license plate to her family — were found in the Basque region of Spain.

A week after Lösche's murder — long before the Chemnitz protest —  her brother Andreas lamented that her death was being used to spread racist messages. In October, he was interviewed by the German magazine Cicero about hate mail that had been sent to the family.

Paragraph 22 of the German copyright law prohibits the publication or dissemination of images of people without their consent if the depicted persons can be recognized.

The law on photography came into effect in 1907 after two photographers took pictures of Chancellor Otto von Bismarck on his deathbed.