The head of Germany's euroskeptic AfD party has denied allegations he plans to leave the organization in order to form a new party. The announcement follows months of infighting for the Euroskeptic AfD. 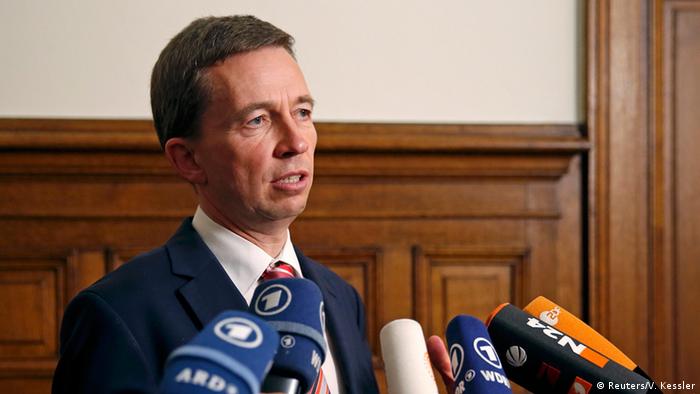 Bernd Lucke, party speaker and co-founder of Germany's right-wing Euroskeptic Alternative for Germany (AfD) party, on Tuesday played down rumors that he was planning to leave the party and form a new political organization.

There has been a long-simmering dispute on the future direction of the party between Lucke and his wing, whose key concerns are free-market policies and the abandonment of the common European currency, and the more nationalist group led by the party's other co-founders Frauke Petry, Konrad Adam and Alexander Gauland. 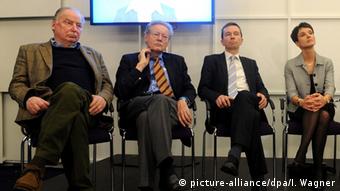 Of the AfD's four heavy-hitters, Lucke is probably the most powerful and simultaneously the most isolated

Though Lucke kept his distance from the Dresden-based anti-Islamization group PEGIDA, albeit voicing support for "most of" their desires, Petry met with the group's leaders in an effort to find common ground in the vacuum on the right of German politics - with Chancellor Angela Merkel's Christian Democrats (CDU) traditionally a rather centrist party among European conservatives.

While economics professor Lucke has tried to keep the AfD on its financial liberalism track, Petry and her camp have been more openly critical of Germany's immigration policies.

Despite the squabbles, the AfD has continued on its path to success - though it fell just short of the 5 percent hurdle to join the federal parliament in 2013, last year it was elected to the European Parliament and has gained seats in five regional German parliaments, most recently in Bremen.

Adam: new initiative reminds me of the Jehovah's Witnesses

The infighting escalated Monday when Petry, party co-chair and head of the AfD for Saxony, called on Lucke to distance himself from reports that his new initiative Weckruf 2015 (Wake-up call 2015) was a new and separate party.

According to German news agency DPA, Petry and Adam even went so far as to block Lucke's access to his party email account to show their displeasure with what they have previously described as his "despotic" leadership. 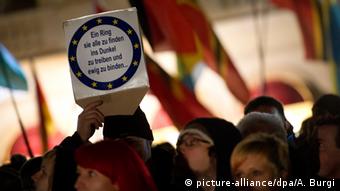 The AfD's position regarding PEGIDA could be more clear, but even Lucke might support EU criticism like this

Speaking from Strasbourg, where he is a member of the anti-euro bloc in the European Parliament, Lucke clarified that his new group, which was joined by over 1,000 AfD members in under 12 hours, was "an attempt to save the AfD" from being "threatened by fraying at the edges."

"We want to stay in the AfD to defend our ideas," he told reporters, adding that he wanted to prevent the party from entering the territory of "enraged citizens" populism.

Konrad Adam mocked the name of Lucke's party-within-the-party, calling it "really strange" and saying it made him think of "the Jehovah's Witnesses or the Salvation Army."

Gauland, meanwhile, called the initiative a "tool for battle within the party," saying that he could not see how Lucke planned to save the AfD with it. Gauland argued that the AfD needed both a nationalist and a free-market wing: "I am completely in favor of us doing everything to maintain unity, but there are of course limits at some point."

Lucke hopes to use the initiative to consolidate power at the next party conference in June. He had already paved the way for himself in January, when he successfully persuaded the party to approve a measure reducing the leadership from a three-person formation as it stands now, with himself, Petry and Adam at the helm, to a single party chairperson.

The vote for the new, solitary leader will be at the party conference in the city of Kassel in mid-June.