A timeline of FIFA scandals under Blatter

For the past 17 years, Joseph Blatter has headed the world football organization FIFA. The arrest of seven high-ranking officials is one scandal among many during his tenure as president. 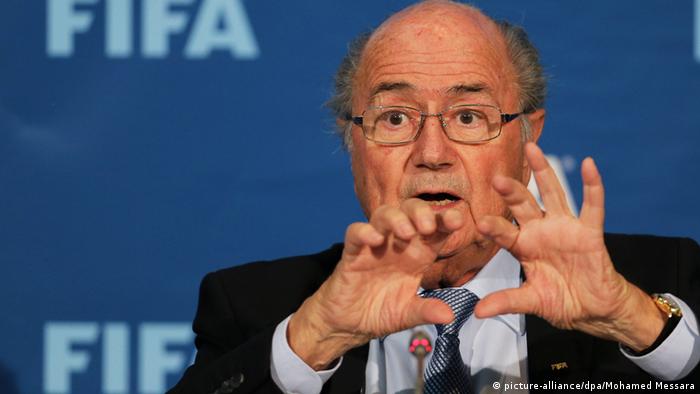 On Wednesday, just two days before FIFA is to convene for its upcoming congress, the arrest of several high-profile officials has caused an international uproar. It seems that FIFA president Sepp Blatter wasn't implicated in the investigations. Even so, his time at the top has been marked by many scandals.

In 1997, before his presidency began, Blatter was already caught up in a scandal instigated by his predecessor Joao Havelange and his former son-in-law Ricardo Teixeira. The two men pocketed millions in bribes from World Cup marketing deals. Blatter was exonerated by all of the suspects, even though he had wired 1.5 million Swiss francs back to Havelange's bank account. At the time Blatter was serving as secretary general, but his actions suggest he was aware of the scheme.

In 1998, Blatter won the presidency over UEFA President Lennart Johansson shortly before the start of the World Cup in France. To this day, there are still allegations of payments of $50,000 to each of the African delegates who were staying at a Paris hotel. Blatter, however, has persistently denied these claims.

In 2006, then FIFA vice president Jack Warner took over the marketing of the coveted World Cup tickets in his home country of Trinidad and Tobago, which had qualified for the games in Germany. His family business allegedly pocketed $900,000 in commissions. However, FIFA investigations were only able to bring evidence against Warner's son, but not the FIFA vice president himself who was also a member of FIFA's executive committee at the time. Warner got off on a warning.

In 2010, the allocation of the 2018 and 2022 World Cups to Russia and Qatar, respectively, caused major headlines. Ahead of the announcement, two executive members were suspended for corruption. The football organization also investigated allegations against the two countries tipped as hosts. Suspicions surrounding the case remain to this day, even though the probe was halted after investigators failed to recover substantial evidence.

In 2011, Qatar's Mohammed bin Hammam went up against Blatter in the bid for FIFA presidency. However, shortly before the vote, the Qatari official was confronted with concrete corruption allegations from the Caribbean. The 35 votes from the Confederation of North, Central America and the Caribbean Football Association (CONCACAF) were decisive. While Blatter had promised the association an official FIFA donation worth $1 million, Bin Hammam attempted to give each association $40,000. But his cover was blown when other officials, who had already been convicted of corruption, discredited him.

In 2014, reports in Brazil pointed to the illegal distribution of World Cup tickets that had belonged to the deceased Argentinian official Julio Grondona.

Opinion: FIFA is a hopeless case

Seven FIFA officials are now detained and there are investigations underway by the Swiss Justice Department about the awarding of the 2018 and 2022 World Cups. Enough is enough, says DW's sports editor Stefan Nestler. (27.05.2015)

Senior members of the German Football League organization and the German FA have spoken up about the FIFA controversy on Wednesday. Even sports manufacturer Adidas has made a statement. (27.05.2015)