A tale of two sister cites

Ten years ago a bridge created a link connecting the formerly divided town of Görlitz on the German side and Zgorzelec on the Polish side. Tourists flock to Görlitz but not really to Zgorzelec - we wanted to know why. 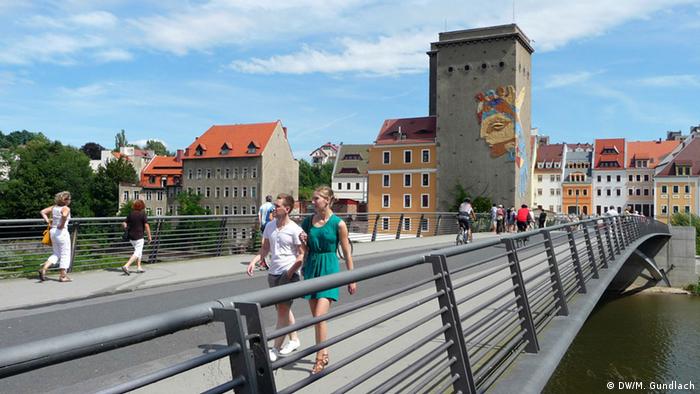 "Nowadays it looks very different over there!" A couple in their 50s has settled comfortably on a bench on the Altstadtbrücke bridge. Ice cream cone in hand, they gaze across at the other shore. To this day, "over there" still means the Polish side - Zgorzelec - to anyone who was born in Görlitz.

They are impressed with the colorfully restored houses on the banks of the river Neisse. "Back then," the man recalls, "everything over there used to be utterly ugly." The woman nods and says "Nu," which means yes in the local dialect.

On the Altstadtbrücke - literally, Old Town bridge - people from Görlitz, Zgorzelec and tourists come together. A constant stream of people cross this moderate construction placed where the river has a width of some 60 meters (200 feet). It is not apparent that there is a border here. There are no signs marking German or Polish territory and most definitely no border checkpoints.

From a divided town to a European city

For centuries the Altstadtbrücke connected the center of Görlitz with its eastern suburb, which today is Zgorzelec. In 1945, that bridge was destroyed, and the town divided into the sister cities of Görlitz and Zgorzelec. Ever since, the river has been the German-Polish border. In 1998, along with a dozen other German towns, Görlitz and Zgorzelec jointly declared itself to be a "Town of Europe." It's not an official title but more a means of self-expression, showing a commitment to the European ideals of understanding and integration. 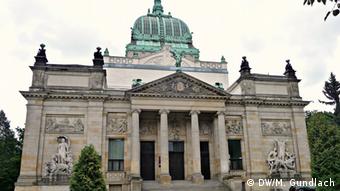 The Dom Kultury was originally built as a 'Hall of Glory' to honor of the German emperors Wilhelm I. and Friedrich III.

The Altstadtbrücke was reconstructed in 2004 to mark the European Union's eastward expansion - that was the year Poland joined the EU - and it has become a symbol of a merging Europe.

"The construction of the bridge made a big difference for us," says Barbara Szutenbach, 52. "Those of us who come from Zgorzelec now know every corner of Görlitz." Szutenbach works at the Dom Kultury (Cultural Center) in the Ulica Parkowa, which is definitely worth a visit.

The building looks just like the German parliament building in Berlin, the Reichstag, only smaller and without the glass dome - and that's a great clue for visitors like me who have to find their way to the Dom Kultury by asking directions. The cultural center organizes concerts and hosts art exhibitions. It is one of a few places that draws in crowds from both sides of the border.

As far as looks are concerned, the German sister city is arguably the more attractive one. The town, an architectural gem, markets itself successfully as a film location. The Old Town of Görlitz reflects centuries of architectural history, including artful pillars, decorated house fronts, and arches that open up unexpected vistas. 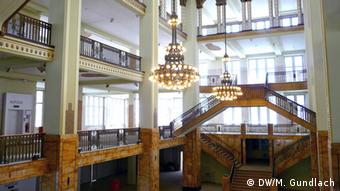 Movie location Görlitz: a historic store served as the hotel lobby set in the film 'The Grand Budapest Hotel'

The Old Town was extensively and expensively restored after German unification in 1990. But then there is a moment of irritation: Towering above a beautiful Renaissance building on the Brüderstrasse going towards the river are the upper floors of the grey, prefabricated concrete slabs typical of Socialist architecture. They are a stark reminder of Zgorzelec.

"When people from Görlitz cross the bridge to us, then it is to get a cheap haircut or cigarettes. They do not find the town attractive," Barbara Szutenbach from the Dom Kultury tells us.

Nevertheless, Zgorzelec is a picture-book example of modernity, laments Lorenz Kallenbach from the "Second Attempt" society, which organizes numerous German-Polish projects for young people in Gölitz. The discussion at the table, laden with coffee and fruit, is focused on what one would want to show a visitor.

Twenty-six-year-old Kallenbach is well aware that Zgorzelec does not comply with tourism's classic ideal of beauty. But in Zgorzelec you can witness "the cold reality of the 20th century, the dark side of modernity. What does prefabricated concrete housing mean? What mark does the mining industry leave behind?" he asks, pointing out the significance of the city behind its worn facade.

Joint plans for the future 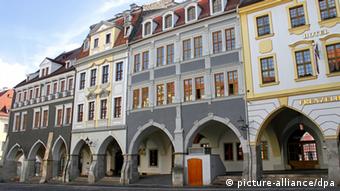 The coffee is nearly gone when the question of the future of the "Town of Europe" is raised, and with it the query of what else could be done to bring Görlitz and Zgorzelec closer together. "Common urban planning is needed," Kallenbach says decisively. "And more bilingualism," his Polish colleague Ania Caban adds.

And she is right. Anyone looking for the 14th-century town hall in Görlitz will only find directions in German. Anyone wandering through the Neissepark, a municipal garden in Zgorzelec, had better be able to understand Polish if they want to read the information in the park describing the local wildlife and what squirrels and martens get up to here.

Back on the Altstadtbrücke, a young Chinese couple strolls across the bridge and veers to the right, taking the route to the Neissepark. Briefly, their conversation is audible, but not easily understood. Their faces, however, speak volumes. They laugh and are amazed. Perhaps because they are standing in one of the few places in the world where it couldn't be easier to simply walk back and forth between two countries.

Görlitz: The resurrection of a tiny eastern German border town

Görlitz, a small city in Saxony, is well known for its unique architectural beauty. But this wasn't always the case. A new exhibition documents the city's dramatic transformation, and emergence as "Pensiopolis." (18.05.2015)