A school for orangutans: learning to survive in the wild

The orangutans in the jungle school run by the Zoological Society of Frankfurt have human names. Their huge, curious eyes take in their environment, the Indonesian primeval forest. This is their home and yet they scarcely know the forest. That is set to change. With help from human trainers, the apes are learning to live in the wild again.

They have names like Dora, Suro or Jackie. And they also behave like humans, displaying childlike curiosity as they get to know their original habitat again, the rainforest in Sumatra.

They climb, jump or hang on to the backs of visitors. Orangutans rarely move around on their feet. They are meant to swing from the tree tops. For the red-haired apes, all of this is new even though they aren't babies anymore. Dora, Suro, Jackie and the others have gained quite a bit of life experience. They are between 5 and 19 years old and have spent years in captivity as pets and status symbols. Now, they're learning survival skills for the jungle. The aim is to eventually release them into the wild.

Not everyone will make it. Some are too old. A orangutan in the wild has a lifespan of a maximum of 40 years. Those who have spent half their life in captivity have slim chances of living a “normal” monkey's life.

Dora, Suro and Jackie have learnt a lot in their lives. But not how to survive in their original habitat – the primeval forest. Hunting for food, building nests, understanding trees – those are the skills that the biologists of ZGF are teaching the apes.

It's a race against time. The number of orangutans in the wild is declining rapidly. Only about 1,600 live in protected areas. Sumatra is estimated to have 6,000 of the apes. But, it's hard to verify the figures since the animals live high up in the tree tops and are hard to spot.

So far, the ZGF has successfully released around 160 orangutans in the wild. For Dora, Suro and Jackie to join them, they first need to learn a host of skills – like knowing that termites in the wood are an important source of protein. Or that orangutans need to regularly change their nests in order to avoid sudden danger during sleep. Or that trees need to be thicker than cage bars so that they can be climbed safely.

Meanwhile, the apes that have already been released have given birth to a handful of babies. That is a huge success for the biologists of the ZFG. Firstly, that helps to secure the survival of the species in a natural way. Besides, parents remain the best teachers for their offspring when it comes to understanding the secrets and mysteries of the jungle. 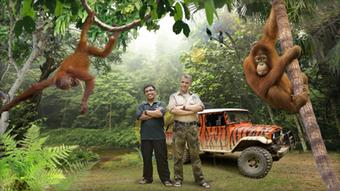